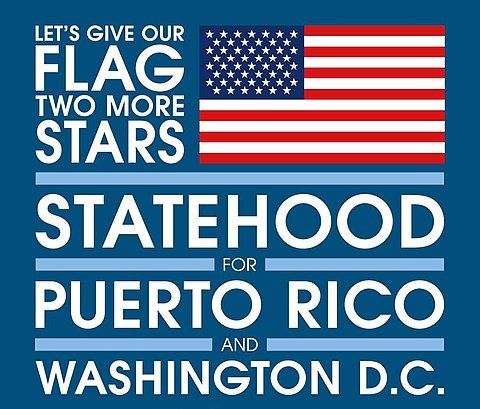 Happy Flag Day!  Two years ago, I observed the holiday with A 51st star for Puerto Rico on Flag Day.  That kicked off a series of popular posts that I chronicled in Samantha Bee helps update 'Vox on Puerto Rico statehood and John Oliver on territories,' the fourth most read entry of the seventh year of Crazy Eddie's Motie News last year, which included John Oliver on D.C. Statehood, and Another bill introduced to admit Puerto Rico as a state, an update on Puerto Rico statehood for the eighth year of Crazy Eddie's Motie News this year, in fact, last month.  For this year's celebration, I'm giving the District of Columbia its time in the spotlight, as WUSA reported last month DC statehood to have its first hearing this summer.

That's good news for the residents of the nation's capital.  However, it may not come to pass because of opposition in the Senate and the possibility that it might take a constitutional amendment to allow it to become a state.  WUSA had a debate of sorts about those very issues earlier this month, beginning with Rep. Jamie Raskin: Puerto Rico could be key to DC getting statehood.

I'll return to Raskin's proposal after the next segment, 'This is historic' Delegate Norton discusses path forward for DC statehood, where she continues the debate with Roger Pilon of the Cato Institute, who pours cold water on the idea.

House Majority Leader and Maryland Congressman Steny Hoyer joined DC Delegate Eleanor Holmes Norton in the fight for DC Statehood today. He officially signed on as a co-sponsor for HR-51 which would make DC the 51st state and give residents a vote in Congress. Delegate Norton and Roger Pilon of the Cato Institute go Off Script on the chances of statehood becoming a reality.

I'm on the side of Raskin, Hoyer, and Norton, as I think the residents of Washington, D.C. deserve equal self-government.  I'm sure that Pilon is right about how the federal district is governed and am afraid that he might also be right about the majority of Americans or at least their elected representatives may not be in favor of shrinking the district to make a state possible.  Sigh.

Follow over the jump for more on Raskin's proposal that Washington, D.C. and Puerto Rico be admitted together.

I first read the idea in Can Democrats Win The Senate By Adding States? It’s Been Done Before at FiveThirtyEight.


It’s been 60 years since a new state entered the union, but now Democrats and liberals are accelerating efforts to gain statehood for Washington, D.C., and Puerto Rico. One of their motivations is the future of the U.S. Senate, which is currently biased toward the Republican Party. The logic goes that if Democrats can get unified control of the federal government after the 2020 election, they could push through statehood for both, adding four more seats to the Senate, and all four would likely be Democratic leaning.
...
Which brings us back to D.C. and Puerto Rico. Both would likely vote Democratic — D.C. is solidly Democratic in presidential elections and Puerto Rico would probably go blue, though that’s not a given. Theoretically, the two new states would give Democrats four more seats in the upper chamber. But first Democrats would need to win control of Congress (to get statehood legislation passed) and very likely the presidency (to sign the bill). The Constitution grants Congress the power to admit new states, but doesn’t say much else about the process for admission or what requirements new states have to meet. And passing such legislation won’t necessarily be easy, even if Democrats do gain full control of Congress.

Efforts to push D.C. and Puerto Rican statehood seem to be gaining momentum, but they’ve still been uneven. Over 200 House Democrats — most of the party’s 235-member majority — have signed on to a bill that would grant D.C. statehood. While it’s unlikely to pass in the GOP-controlled Senate, companion legislation has also been introduced there, with more than 30 Democrats backing it.

This includes all the Democratic candidates for President, as the first clip reported.  In fact, the image I used to illustrate this entry comes from one of the Delaney campaign via Wikipedia.

I just cropped it to remove the Delaney campaign logo, as I didn't want to give the impression that I was supporting Delaney.*

The FiveThirtyEight article also mentions the partisan opposition to statehood for both Puerto Rico and Washington, D.C.


But even if Democrats went all in on statehood for both D.C. and Puerto Rico, there are serious obstacles to achieving either. First, Democrats would have to win the presidency and Senate in 2020 while holding onto the House. And even if they manage that, the Senate requires a supermajority of 60 votes to get most things done. It’s nearly impossible to imagine Democrats gaining 13 Senate seats to get from the 47 they already have to the supermajority they’d need to pass bills without any Republican votes. So it may be difficult to corral enough bipartisan support to pass statehood legislation for Puerto Rico and, especially, D.C.

As I wrote already, sigh.  Just the same, I recommend reading the entire article.

*Speaking of Delaney and the rest of the Democratic field, the participants in the debates later this month have been selected.  I plan on following up Democratic presidential candidates from left to center from Voteview as I promised.  That will be after I write about the latest news about the Michigan Attorney General's prosecutions in the Flint Water Crisis.  Stay tuned.
Posted by Pinku-Sensei at 4:42 PM