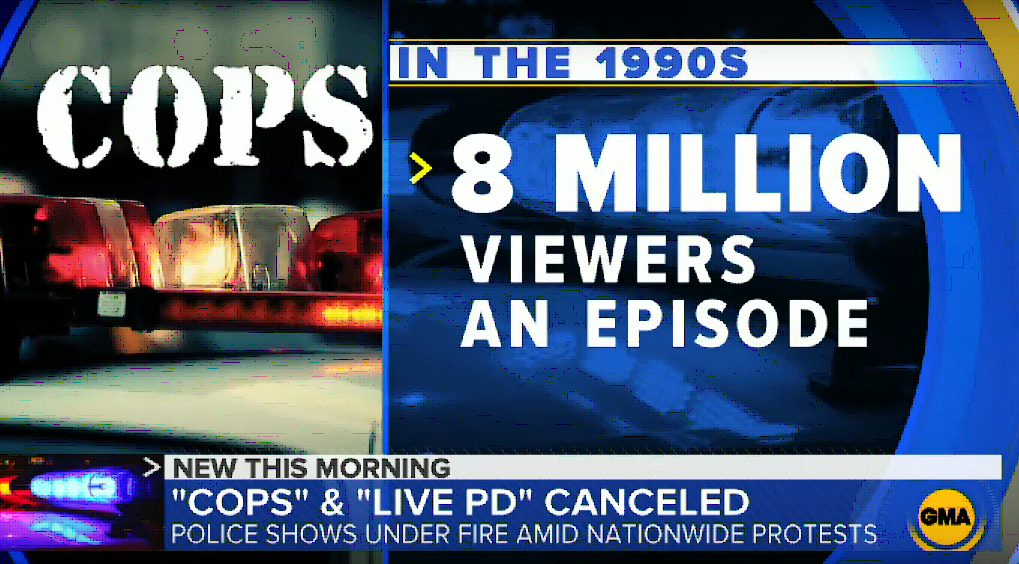 Here's some news for a late Sunday entertainment feature that I probably should have used a week ago, when my home broadband service was out and I was posting A test with tweets and I haven't seen this many statues fall since the end of the Cold War from my smartphone, ‘Cops,’ ‘Live PD’ canceled amid protests against police from "Good Morning America."*

The observation that shows like "Cops" and "Live PD" glorify the police is not a new one. Vox explored that angle last year in The truth behind the TV show Cops.

The longest-running reality show in The US.
...
“When it premiered, “Cops” was one of the first reality television shows and it has been broadcasting continuously since 1989. In this video, we worked with the podcast “Running From Cops” to understand why the show has stayed on TV for so long. At the time it was selected for development by Fox executive Stephen Chao, the writer’s strike of 1988 had created a desire for unscripted television that didn’t require hiring union talent.

But once “Cops” was on the air, it was the vision of “Cops” creator John Langley that would make the show last. He understood that the show presented a new opportunity for law enforcement agencies and it was his approach to making “Cops” that has kept police interested in appearing on the show. While “Cops” no longer has the high TV ratings it garnered during the nineties, it has been a persistent presence on television and it has spawned several imitators, including the very popular show “Live PD”.

Like “Cops”, these shows use variations of a reality format developed by “Cops” that features police performing their daily duties. The stripped-down format has remained nearly the same since the show began in 1989 and during the thirty years since “Cops” has had the same agreement with police that agree to appear on the reality show.

To learn what that agreement is, make sure to watch the video above.

To learn even more about “Cops”, make sure to listen to “Running From Cops”: a podcast that investigates various aspects of “Cops” and examines its cultural impact on policing on America.

I have a long and short response to this slightly old news. My long reaction is that pop culture matters, which is why I write a lot about entertainment, including television about politics and government. That's because television entertainment can shape our political opinions, so what people watch matters. In the case of "Cops" and "Live PD," it improves public perception of police, which I generally have no problem with; I am in favor of people seeing government working and police are part of the government. On the other hand, the shows may disproportionately present African-Americans and other minorities as criminals. Representation matters and bad representation can be actively harmful. I think that the production companies and networks got that message, because I doubt these decisions would ever have been made for purely commercial reasons. "Cops" had been the longest-running prime-time series and "Live PD" was the highest-rated show on A&E; those aren't normally the kind of shows that get cancelled. That they have been shows that money isn't everything, even for television.

The short reaction was to laugh at the cancellation by tweeting The Simpsons - COPS: In Springfield (Bad Cops).

A scene from The Simpsons, Homer's Triple Bypass episode. This is from a DVDRip, so the quality should be fine. Have fun with the Bad Cops!

*My carrier finally fixed the broadband connection on Saturday, eight days after the problem began, by replacing a loose wire a block away. A tree branch probably knocked it loose as it fell. I recall hearing a couple of thumps just as the connection first went bad, which could have been the branch hitting the wire and then the ground. The last time I heard something like that was at midnight of March 3, 2018, when a tree fell in my backyard and knocked out power and internet for three days. I posted 'Jane' the best documentary not nominated at the 2018 Oscars for World Wildlife Day, The UCLA Marching Band at the 1969 Oscars for Marching Music Day, and 'The Emoji Movie' the biggest winner (loser) at the 2018 Razzie Awards from a nearby Starbucks as a result.