U.S. is officially in recession

I made a prediction about when the recession would be officially declared in 100,000 dead and 40 million unemployed in the U.S., the human toll of the pandemic so far two weeks ago.

Near the end of February, I wrote "This stock market crash is the one reason I am not revising the recession call I made in CNBC explains how the yield curve predicted every recession for the past 50 years. Without the cornovirus outbreak, I might have to. With it, I still think it's likely." Within a month, I posted FiveThirtyEight examines coronavirus and the economy, by which time the recession was on, even if it won't be declared officially until July.

The NBER surprised me by calling the recession a month earlier than I expected. Yahoo Finance reported that Monday in The U.S. economy is officially in recession, NBER says.

Here are the most relevant excerpts from the NBER press release via Calculated Risk.

Cambridge, June 8, 2020 - The Business Cycle Dating Committee of the National Bureau of Economic Research maintains a chronology of the peaks and troughs of U.S. business cycles. The committee has determined that a peak in monthly economic activity occurred in the U.S. economy in February 2020. The peak marks the end of the expansion that began in June 2009 and the beginning of a recession. The expansion lasted 128 months, the longest in the history of U.S. business cycles dating back to 1854. The previous record was held by the business expansion that lasted for 120 months from March 1991 to March 2001.

The committee also determined that a peak in quarterly economic activity occurred in 2019Q4. Note that the monthly peak (February 2020) occurred in a different quarter (2020Q1) than the quarterly peak. The committee determined these peak dates in accord with its long-standing policy of identifying the months and quarters of peak activity separately, without requiring that the monthly peak lie in the same quarter as the quarterly peak. Further comments on the difference between the quarterly and monthly dates are provided below.

Because a recession is a broad contraction of the economy, not confined to one sector, the committee emphasizes economy-wide indicators of economic activity. The committee believes that domestic production and employment are the primary conceptual measures of economic activity.
...
The usual definition of a recession involves a decline in economic activity that lasts more than a few months. However, in deciding whether to identify a recession, the committee weighs the depth of the contraction, its duration, and whether economic activity declined broadly across the economy (the diffusion of the downturn). The committee recognizes that the pandemic and the public health response have resulted in a downturn with different characteristics and dynamics than prior recessions. Nonetheless, it concluded that the unprecedented magnitude of the decline in employment and production, and its broad reach across the entire economy, warrants the designation of this episode as a recession, even if it turns out to be briefer than earlier contractions.

As for my reaction, I'll begin by being a good environmentalist and recycling what I wrote two weeks ago.

While I was right about the timing [of the recession, not the call], I was wrong about the extent of the recession. As I wrote in The tax bill and the U.S. economy in 2018 and beyond, "I expect the next recession to be somewhere between the 2001 recession or the 1990-1991 recession in its effects, probably closer to 2001." Instead, the U.S. is experiencing the highest unemployment since the Great Depression, all within the first two months. Yikes! Now I know how a pandemic or nation-wide natural disaster affects the U.S. economy. I'm not sure I wanted to find out.

The only good thing is that the official recession, the time when the economy as measured by GDP is shrinking, may indeed be brief. For all we know, we may be out of it already. The bad news is that employment may not recover for years, if not a decade. Look at this graph of unemployment during all the post-World-War-II recessions from Calculated Risk and see both where unemployment is now and how long it took for unemployment to recover during all previous recessions, particularly the Great Recession, which is labeled as the "2007 Employment Recession." 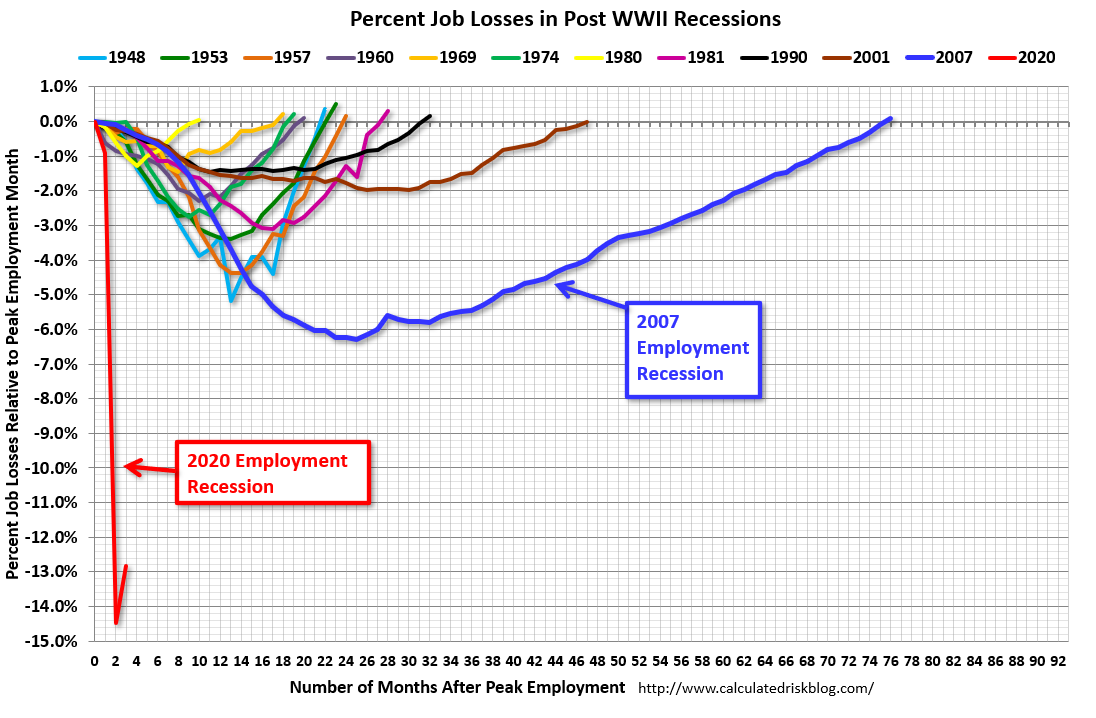 Yeah, it could be a while.