Most Americans stay home, allowing people to speed on open roads, a driving update for Pearl during June 2020

I predicted when I would post this entry in Oil falls below $0.00 for the first time ever and my prediction came true.


I'm an example of people driving a lot less and reducing consumption. In January, I expected to write the next driving update in early April. It's now late April and I've driven so little since Michigan colleges and universities suspended in-person classes in March that I may not write that update until June.

It's not just June, but late June, and Pearl didn't pass 51,000 miles until yesterday, Friday, June 26, 151 days — almost five full months — since Pearl the Prius's odometer rolled over 50,000 miles on January 27, 2020. That translates to 6.62 miles per day, 201.99 miles per standard month, and 2423.84 miles per leap year or 2417.22 miles per standard year. I have never driven my primary vehicle so little. The next lowest I can find was for February 2012, 7.25 miles per day, 236.4 miles per standard month, and 2828.75 per standard year, and that was because I was not driving my old car Yuki for more than three weeks, had a long holiday break during which I didn't drive much and a mild winter that allowed me to walk more in a walkable neighborhood. Of course, that's all due to the pandemic and resulting recession keeping people at home.

Calculated Risk quoted the U.S. Department of Transportation about the effect these conditions had on driving in April.

Bill McBride made two graphs with the data. Here's the second graph, which shows the year-over-year change in vehicle miles driven. 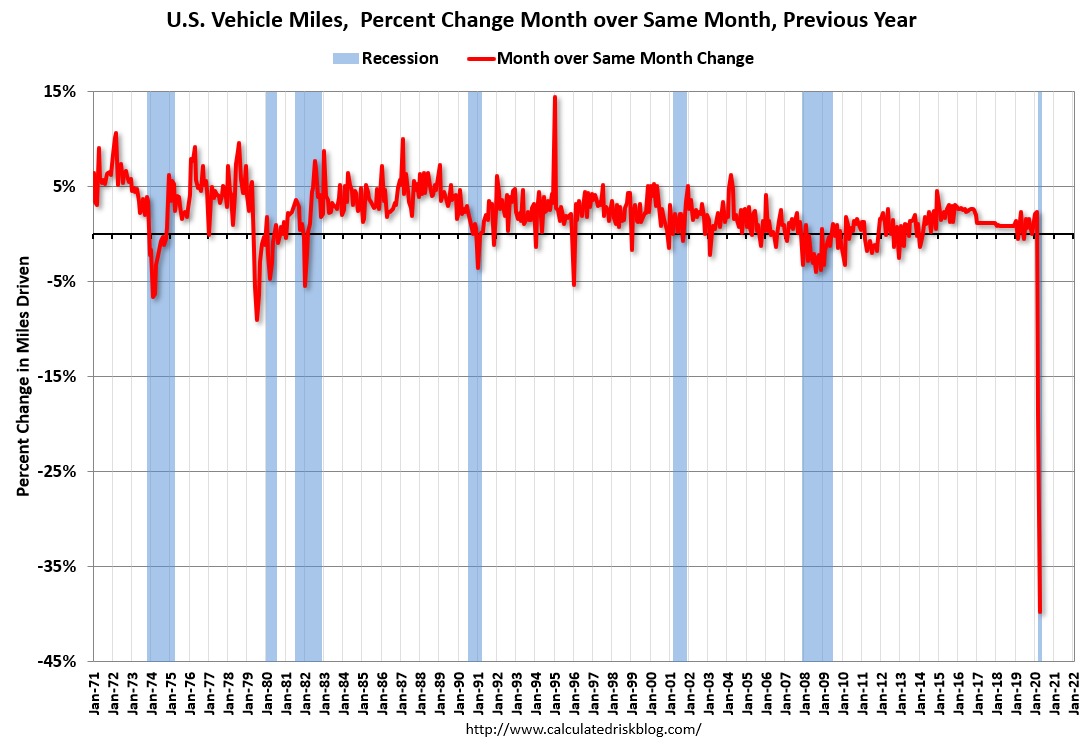 That's quite the drop in driving! In contrast, the usual graph I use, which depicts the rolling 12 month total vehicle miles driven, does not make the drop look as dramatic. 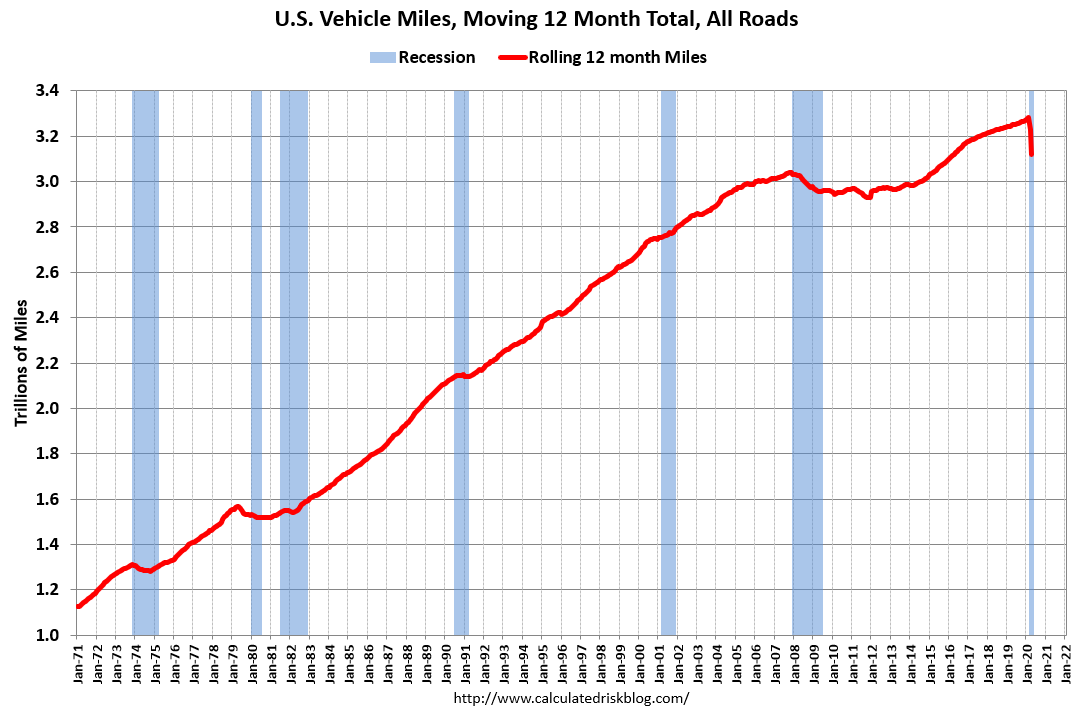 Bill McBride of Calculated Risk wrote "This will be an interesting measure to watch when the economy eventually starts to recover." For a foretaste of what that might look like, here's the year-over-year change in gasoline consumption from the most recent Six High Frequency Indicators for a Recovery. 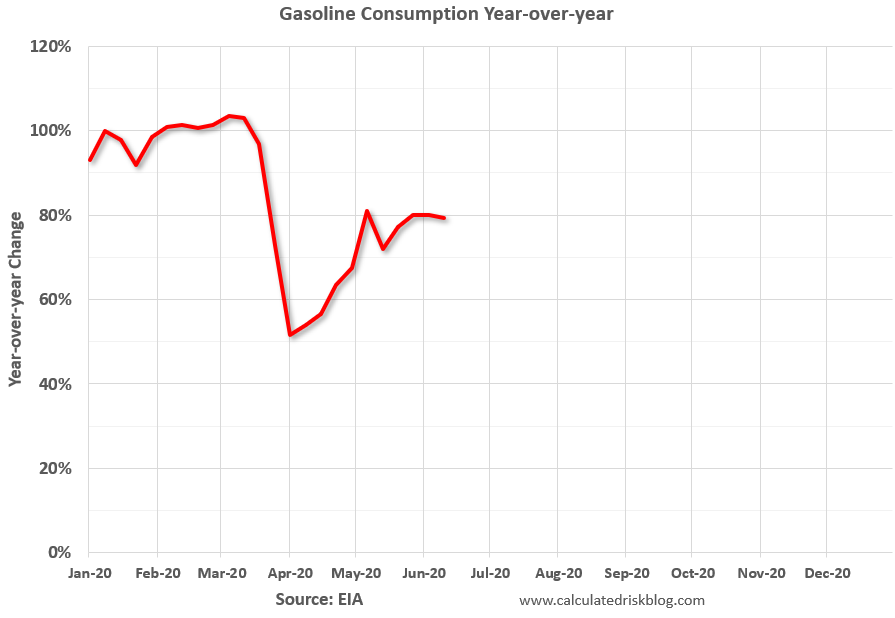 The year-over-year miles driven should look a lot like this, but the rolling 12 month total vehicle miles driven will continue to go down for at least the next year.

While most Americans are driving much less, a few of us are driving a lot faster. Inside Edition covered that last month in Many Drivers Caught Speeding During Pandemic.

With millions of people following stay-at-home orders, those with a need for speed can’t seem to resist the allure of empty highways. Rush hour is non-existent, and lots of “crazy COVID drivers” are putting the pedal to the metal and ignoring the speed limit during the pandemic. Inside Edition sent a team of investigative reporters to New York City and Long Island where they clocked people going as much as 50 miles an hour over the speed limit, along with plenty of reckless driving.

All of that was around NYC. NBC's Today Show captured the same behavior in California in Drivers Hitting Triple-Digit Speeds On Open Roads During Coronavirus Pandemic.

With many people staying home during the coronavirus pandemic, once-crowded highways are now relatively empty, prompting more drivers to speed. According to the California Highway Patrol, officers have seen an 87% increase in citations for speeding in excess of 100 miles per hour. NBC’s Erin McLaughlin reports for Weekend TODAY.

While the roads have been open, if not empty, here in Metro Detroit, I haven't been tempted to drive that fast, nor have I seen people driving 90+ MPH. Then again, I stayed pretty much at home during the latter half of March and all of April, so I avoided the freeways when they at their emptiest. Even so, there is little in the way of traffic congestion now. Rush hour? What's that? 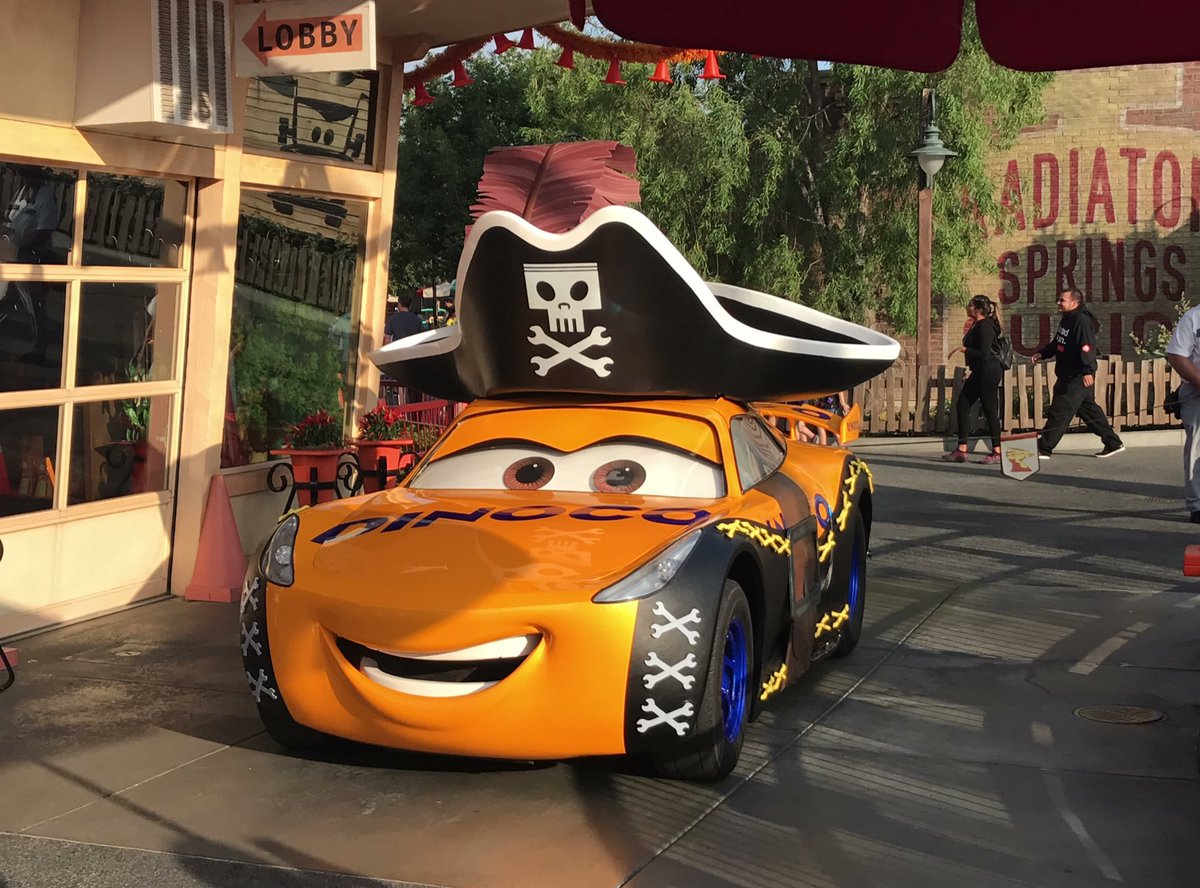 I conclude by noting that I would normally illustrate my entries with an image from the "Pirates of the Caribbean" movies, but today I wanted something different, so I searched for "pirate cars" and found the photo of Cruz Ramirez from "Cars 3" above. Not a bad Halloween costume for an automobile. Maybe I'll name my next car after her. Stay tuned.
Posted by Pinku-Sensei at 7:20 PM