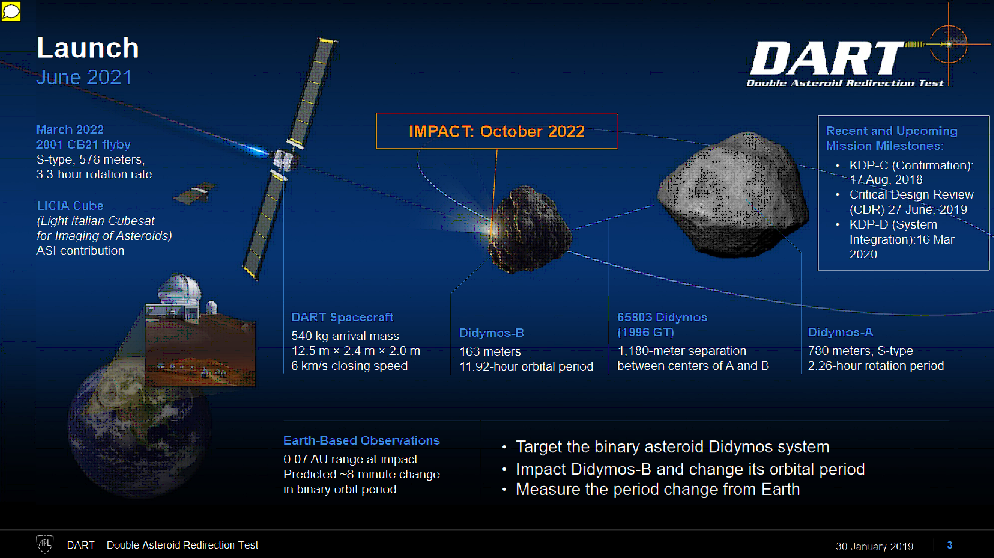 Happy International Asteroid Day! To celebrate the today, which I see as the younger but paradoxically more established version of Apophis Day, I'm sharing four videos Seeker posted during the past year about asteroids. The most recent, which was uploaded just yesterday, had Seeker ask If An Asteroid Was Heading For Earth, How Could We Stop it?

NASA and ESA have a unique plan to slam a spacecraft into an asteroid—here’s why.
...
Agencies around the world are working to bring samples of asteroids back to Earth, like NASA’s Osiris-Rex and JAXA’s Hayabusa-2, because bringing a piece back is like looking into a time capsule from the universe. BUT asteroids pose a serious threat to Earth. And ESA and NASA have a unique plan to combat that particular problem: they’re going to slam a spacecraft into an asteroid.

But asteroids also post a serious threat to Earth and so ESA and NASA formed a scientific collaboration known as the Asteroid Impact and Deflection Assessment, or AIDA, to combat this potential problem. The collab consists of two missions: NASA’s Double Asteroid Redirection Test, or DART, and ESA’s Hera Probe.

DART will smash into an asteroid in 2022 helping the AIDA mission study how effective a kinetic impactor would be in asteroid deflection and then four years later the Hera probe will arrive to do some assessments.

As I wrote in a comment at the video, "Perfect video for International Asteroid Day!"

Seeker examined the mission eight months ago in NASA Plans to Slam a Spacecraft Into an Asteroid, which I'm including for completeness.

What if a deadly asteroid was on a collision course to Earth? NASA and the ESA have come up with a solution.
...
Asteroids impacting Earth can be devastating—killing all the dinosaurs in existence level devastating. But even the asteroids that aren’t mass-extinction huge can be a serious threat.

Every few thousand years Earth (a.k.a. you and I) get hit with a massive asteroid the size of the Great Pyramid of Giza, so what is the plan when we get hit with the next asteroid?

We get hit with an asteroid about the size of the Great Pyramid of Giza every few thousand years, and when the next one hits it could cause massive damage to an entire region. So when we spot the next one coming, what’s the plan?

As I have written many times about Apophis Day, it's when I observe the perils of space, particularly asteroids. Follow over the jump for the promise of asteroids.

Both of the first two videos refer their viewers to This Metal Asteroid Could Reveal Secrets About Earth’s Core | Countdown to Launch, so let's watch it.

NASA and Arizona State University plan to send an orbiter to the Psyche asteroid, which is believed to be made mostly out of metal. This mission could be the key to understanding the inside of Earth's core.
...
Between Mars and Jupiter, you can find Psyche, one of the only asteroids that scientists believe might be made mostly of metal and researchers from NASA and and Arizona State University will be sending an orbiter to the asteroid for the very first time.

Exploring Psyche’s terrain could be our only key to understanding what the inside of Earth’s core could be like.

Visiting asteroids isn’t new to space exploration with Vesta, Ceres, Ryugu, and Bennu being some of the most recent mission destinations.

And asteroids, for the most part, have been all the same; usually rocky, airless drifting through the cosmos as leftover debris from a chaotic beginning.

But Psyche is different.

That's about the scientific promise of asteroids. What about their practical promise? Seeker has a video about that, too, asking How Close Are We to Mining in Space?

Asteroids hold untold riches when it comes to “untapped resources.” We are getting closer to harvesting materials from these celestial objects, but how close are we to mining asteroids?
...
Asteroids could become the intergalactic pit stops for exploring the universe. They have the potential to become cosmic gas stations, and even the building blocks for habitats on Mars.

Asteroids can be huge, and they're almost everywhere in space. Asteroid mining could yield materials like platinum, iron, nickel, and cobalt; rare minerals; water; and even minerals that are impossible to form on Earth.

And while there are numerous kinds of valuable minerals on asteroids, the first and most important thing we need to do is learn how to extract water. Water is found in Carbonaceous asteroids, also known as C-type asteroids.

This video doesn't just describe what humans can accomplish by mining asteroids, which I've written about, but also takes the sustainability of the enterprise seriously so humans don't repeat the mistakes they made on Earth again in space. That impresses me not only as a Crazy Eddie but as an environmentalist. I approve.

That's it for June. Stay tuned for this year's celebration of Canada Day to begin July.