David Attenborough, Greta Thunberg, and Jane Goodall recognized for films about the environment at the 2020 Critics' Choice Documentary Awards 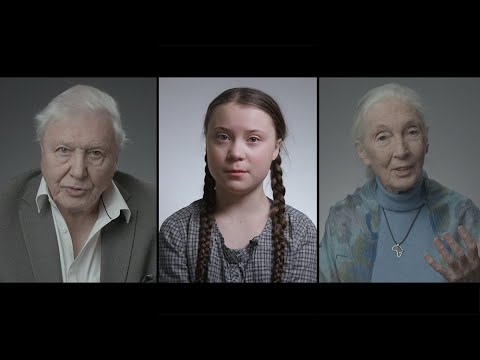 I didn't say which winner at the three winners at the Critics' Choice Documentary Awards I would cover next in yesterday's entry about "The Way I See It" winning Best Score because I hadn't decided yet. When I woke up today, I decided I would focus on winning films about climate, biodiversity, and sustainability. It helped that I saw the image above, as two of the three people depicted, David Attenborough and Greta Thunberg, won awards for their work and appearances in documentaries about the environment last week, while Jane Goodall was the subject of a nominated documentary.* I begin with Sir David Attenborough, who won BEST NARRATION for "David Attenborough: A Life on Our Planet."

Winner of the 5th Annual Critics Choice Documentary Award for Best Narration: DAVID ATTENBOROUGH: A LIFE ON OUR PLANET.

It's too bad Sir David couldn't accept the award himself, but it sets him up well for next year's Emmy Awards, where "A Life on our Planet" should be eligible. If he wins, he can add that Emmy to the ones for "Blue Planet II," "Our Planet," and "Seven Worlds, One Planet." I also think the documentary itself will be a strong contender at next year's Environmental Media Association Awards for documentary film.

To learn more about the film, watch the Factual America episode A Life on Our Planet: Sir David Attenborough's Witness Statement from Alamo Pictures.

Join us as we discuss the new Netflix Documentary, David Attenborough: A Life on Our Planet.
...
Sir David Attenborough is a broadcast legend. And probably no individual has seen more of the Earth's wilderness in his illustrious nearly 70-year career. That makes him the perfect witness to the devastating changes afflicting our planet.

In David Attenborough: A Life On Our Planet (2020), which premiered on Netflix, co-director Keith Scholey of Silverback Films and producer Colin Butfield of the World Wildlife Fund bring us Sir David's witness statement. In the process, they also provide us with simple solutions to saving our planet before it is too late.

"The things that are happening to this world are unnecessary. Not getting out of the problem is unnecessary. So make sure that your voice is heard, so that we solve it." - Keith Scholey

I've been impressed with Alamo Pictures' Factual America series since I included one of their videos in 'Closed for Storm' — the story of Six Flags New Orleans on the 15th anniversary of Hurricane Katrina. This episode demonstrates the series' continued quality.

Follow over the jump to read about "I Am Greta" and "Jane Goodall: The Hope." The subject of the first was named Most Compelling Living Subject of a Documentary and the second was nominated for Best First Documentary.

I begin with I Am Greta • Trailer (Official) • A Hulu Original Documentary.

A force of nature indeed. I Am Greta premieres on November 13.

ABOUT I AM GRETA
The story of teenage climate activist Greta Thunberg is told through compelling, never-before-seen footage in this intimate documentary from Swedish director Nathan Grossman. Starting with her one-person school strike for climate action outside the Swedish Parliament, Grossman follows Greta—a shy student with Asperger’s—in her rise to prominence and her galvanizing global impact as she sparks school strikes around the world. The film culminates with her extraordinary wind-powered voyage across the Atlantic Ocean to speak at the UN Climate Action Summit in New York City.

I'm going to repeat what I wrote for Time names Greta Thunberg Person of the Year for 2019.

Congratulations, Greta! Not only are you the Person of the Year, you are the youngest to ever be named for this title. May you and your youthful followers continue to raise people's awareness and prompt action on the climate.

She's younger than Steven Garza of "Boys State" and younger than any other human recipient of Most Compelling Living Subject of a Documentary (the cats of Kedi are generally younger, but they don't count), so my recycling of my good wishes from last December still works.

As for the film, I think it will provide stiff competition for "A Life on our Planet" at both the Emmy Awards and EMA Awards. I'm looking forward to that, even if I have to wait for next summer to see how that transpires.

Since I like connections as much as I like recycling and closing circles, BBC provided me with a connection between Greta and Sir David in Greta Thunberg and David Attenborough meet for the first time (on Skype).

Greta Thunberg and Sir David Attenborough met for the first time (via Skype as they did not want to add to their carbon footprints) to discuss the climate crisis and share their thoughts on how to make an environmental impact.

Greta, who spoke to Sir David from Stockholm, guest edited the BBC's Today programme on Monday 30 December. The full podcast is available via the BBC Sounds app.

That's quite the mutual admiration society. At least I know I'm not Thunberg's oldest fan.

The next chapter of Dr. Jane Goodall’s life’s work unfolds in “Jane Goodall: The Hope,” premiering on Earth Day, April 22, at 9/8c on Nat Geo, Nat Geo WILD and Nat Geo Mundo. The two-hour documentary special will take viewers through chapters of Dr. Goodall’s journey in the 60 sixty years since her groundbreaking discoveries in Gombe researching wild chimpanzees, including her activism, creation of her non-profit organization [https://www.janegoodall.org] the Jane Goodall Institute (JGI) and [https://www.rootsandshoots.org] Roots & Shoots youth program, along with her current efforts to inspire the next generation.

Congratulations to Jane Goodall, who I'm going to call Dame Jane from now on to give her equal standing with Sir David, for being in a documentary nominated at these awards! You have inspired me since I was a child and you inspire me still.

I conclude with the source of the preview image, David Attenborough and Greta Thunberg's plea for the planet from The World Economic Forum, which unites the two recipients and one nominee I'm writing about today and closes the circle on today's entry.

From disappearing species to plastic pollution and our disastrously weak attempts to recycle it, here's what the top voices on climate change - from Sir David Attenborough to Jane Goodall to Greta Thunberg - have to say about the planet's escalating biodiversity crisis.

I've been raising my voice on this blog since the very first post nine years ago and I plan on doing so as long as I can post.

That's it for today's winners. Stay tuned for one more tomorrow.

*I originally and mistakenly wrote that Dame Jane was a recipient of Most Compelling Living Subject of a Documentary. That was an error.  I thought I saw her name among the list of those honorees, then checked the IMDB page for the awards, saw she wasn't, and double-checked the Critics Choice Association page and found that her film was one of the nominees for Best First Documentary, but her name was also absent from the honorees as well.  I think I had a combination of a senior moment and a thought that she should have been honored.  Oops!  I promise to be more careful in the future.