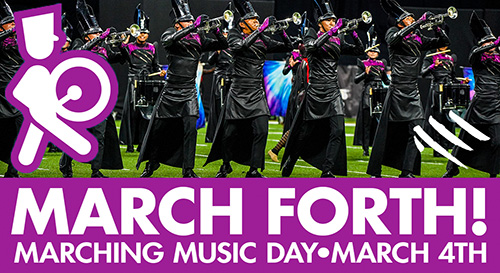 March Forth, because today is Marching Music Day! Normally, I'd celebrate by sharing videos of the marching bands and drum corps, if any, in the most recent Rose Parade, but this year's event was cancelled and I already used the 2019 video for the 2021 New Year's Day entry. All is not lost, as two of my favorite resources for marching music, Drum Corps International (DCI) and Music213, reached into their archives to create two videos I'm using today. As an environmentalist who believes in creative reuse and recycling, I approve!

I begin with DCI asking Who did it best? | Mars, the Bringer of War.

Four performances by three different corps over 30 years of "Mars" from Gustav Holst's "The Planets." Which one did it best?

The consensus from the comments on YouTube is 1995 Cavaliers, but I'm partial to 2012 Santa Clara Vanguard. What do you think?

I appreciated the history and context in this video. As an educator and scientist, I particularly enjoyed Diamond Bar's director describing how he used Luis's videos as part of his lesson plans to improve his band's performance. I'm glad I'm not the only teacher to use YouTube videos in his classroom!

This was one of four videos Luis made for the event. While I'm fairly confident that enough students, teachers, parents, and spectators will be vaccinated by the beginning of the 2021-2022 school year that there will be physical parades this fall and winter, I'm saving the rest in case the pandemic prevents that. After all, I'm an environmentalist; I conserve my resources.

With that, happy Marching Music Day!
Posted by Pinku-Sensei at 12:34 PM