Daylight Saving Time (DST) begins tomorrow and, as I have for the past few years, I'm documenting efforts to stop the switching back and forth between DST and standard time because of the time change's deleterious health effects. Today, I'm sharing news from Florida, Georgia, Michigan, Nevada, and Pennsylvania. Since I live in Michigan, I begin with WXYZ's Michigan lawmaker introduces bill to end Daylight Saving Time changes.

Get ready to lose an hour this weekend as Daylight Saving Time is almost here, but if one state lawmaker has her way, it could be the last chance in Michigan.

We'll spring forward overnight into Sunday. Could that loss of sleep hurt your heart?

Joe LaFurgey promised another segment about state lawmakers introducing bills to either stay off DST or make it permanent. He and WOOD-TV delivered with Time to change time change? Michigan senator says yes.

Hoitinga said she was looking for a State Senator to support her legislation. She might already have one in Jeff Irwin, who I know from covering him for the now-defunct Examiner.com and who I last wrote about when he proposed legalizing marijuana six years ago. I hope they find a way to work together across the partisan divide.

Follow over the jump for stories about ending the switching back and forth from outside Michigan.

Hoitinga mentioned Senator Marco Rubio of Florida in her WOOD-TV interview, so it's no surprise he is the main subject of New4JAX's Daylight Saving Time: Could Be Last Time.

Americans will turn the clock forward this weekend, costing us an hour of sleep, but a group of lawmakers wants to make this the last time we ever have to change our clocks.

I'm going to be a good environmentalist by recycling what my reaction from two years ago.

I normally don't support Republican-sponsored legislation, but in this case, I'm on Rubio's side. After all, even a stuck clock is right twice a day, pun fully intended.

In this case, replace twice a day with twice a year.

Florida's neighbor Georgia is also proposing ending the switch, but its lawmakers can't agree on how. I begin with CBS45 Atlanta's GA lawmaker wants to make daylight saving time permanent.

March 14th marks the start of daylight-saving time, but Georgia could soon be practicing standard time all year long.

Georgia is ready to quit as soon as it makes up its mind about how.

State Sen. Scott Martin plans to introduce resolution urging Congress to do away with changing of the clocks for the entire country...

KTNV Channel 13 Las Vegas didn't mention Rubio or his bill in SB 153 aims to end daylight saving time in Nevada. Instead, Dr. Robin Titus cited being in sync with California as the main outside influence on making a decision.

Get ready to change your clocks this Sunday as we spring forward an hour for daylight saving time. But this could be coming to an end in the future if some state lawmakers get their way. A new bill making the rounds in Carson City would keep Nevada on the same time all year round. Jeremy Chen reports.

Again, I wish Dr. Titus, who has science on her side, luck in ending the changing of the clocks.

I close with some comedy, beginning with Jimmy Kimmel interviewing Pete Buttigieg on Becoming Transportation Secretary & Doing Away With Daylight Saving Time!

Pete talks about guest hosting our show a year ago to the day right before everything was shut down, getting the call to be the Secretary of Transportation from then President-Elect Joe Biden, rumors that he was going to be the Ambassador to China, our nation’s infrastructure, being in charge of time zones, the possibility of doing away with Daylight Saving Time, his stance on self-driving cars, and per Jimmy’s request – finally getting jetpacks into the hands of Americans.

It's not his decision to get rid of DST — as all the news clips explain, Congress will have to do that — but the Department of Transportation will certainly be involved in implementing the end of changing clocks.

I conclude the comedy section with the following recycled greeting card. 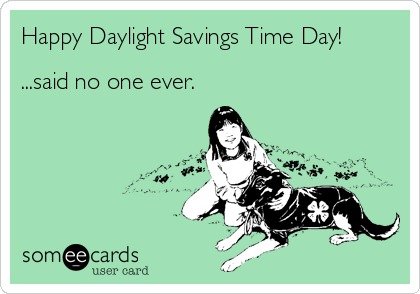 I second this emotion.
Posted by Pinku-Sensei at 1:02 PM