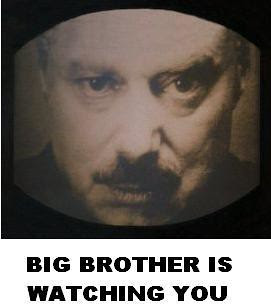 I'm reading a lot about the NSA surveillance program, whether on Facebook or on blogs like Elaine Meinel Supkis's Culture of Life News, who noted that domestic surveillance has been going on a long time.  As she wrote, "I exposed CIA/FBI spying on students in the sixties."  Mind you, she's doing this while ranting about the Bilderbergers, which suggests to me that she's losing it.  That doesn't mean that she's wrong about this point.

The launch of Earth Day in 1970 raised suspicions in Washington, D.C., according to former Representative Pete McCloskey, one of the organizers of the first Earth Day.

The annual event was launched as a national teach-in on April 22, 1970, by former Senator Gaylord Nelson, McCloskey and others. Earth Day galvanized a political movement that led to some of the country's most significant environmental legislation, including the Endangered Species Act and the Clean Water Act.

At a panel discussion on the Endangered Species Act and its future, held Jan. 31 at the Western Section of The Wildlife Society's annual meeting in Sacramento, Calif., McCloskey recalled the FBI's scrutiny of the event. According to McCloskey, President Richard Nixon ordered the FBI to observe college students across the country.

The FBI found nothing.  Just the same, while Elaine may have gone over the deep end, she's right about this one.  Environmentalists are being watched and have been since the beginning of the movement.

If you're interested in this sort of thing, I recommend Green is the new Red, which specializes in stories about domestic intelligence and police activity against enviromental and animal rights activists.  It so happens that they have a story related to the NSA as I write this: How the NSA Kept Us From Knowing About a Previous, Illegal Domestic Spy Program in 2006.  I suggest you read it.
Posted by Pinku-Sensei at 5:20 PM