The Troopers: From Steampunk to Tradition 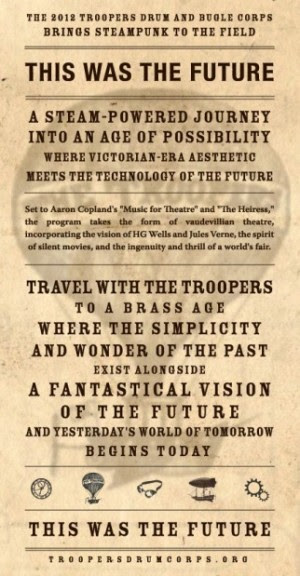 As dedicated readers of this blog might know, I was involved with drum corps for four decades and can't even get away from the topic here, especially when The Activity (yes, that's what the participants call it) intersects with sustainability, science fiction, disasters (real or imagined), or holidays (including fake ones).  I've stumbled over yet another example of drum corps exploring a science fiction theme.  Follow over the fold for my reaction to The Troopers exploring steampunk in "This was the Future."

Here's how the Casper Star Tribune described how the Troopers would adapt their costumes and music to the steampunk genre.


Welcome to the 2012 Troopers Drum and Bugle Corps competitive show, “This Was the Future,” borrowed loosely from the “steampunk” genre and the music of American composer Aaron Copland.

“The music sounds just like the Troopers. The opening tune, Copland’s ‘The Heiress,’ is gorgeous — this big, wide open, typical Wyoming feel,” said corps director Fred Morris.
...
Morris said the corps will keep its well-known military-style uniforms, but color guard uniforms will be tweaked to reflect the “steampunk” feel.

Let's watch how that turned out, in Troopers 2012 This Was The Future.


Just like my entries about The Cavaliers playing music from James Bond and The Madarins and their 2012 show, I'm including the official teaser video, which will likely last much longer than the unofficial one above; the unofficial ones in those entries have already been removed from YouTube.

ETA: So has the one above, which lasted only a year.


As I suspected, gears, goggles, and coveralls with an old-timey marrator.  The rest is just a fairly standard Western-themed show.  It's also missing an element that the Star Tribune mentioned.


First incorporated into mainstream television in the 1960s series, “The Wild Wild West” and later in a Will Smith movie almost of the same name, the genre has also found its way into network television in episodes of “Castle,” and “NCIS: LA;” as well as onto country music star Sugarland’s steampunk-styled lettering on its 2010 CD cover and steampunk-inspired costumes in its stage act.

Yes, the theme to "The Wild, Wild West," which TVTropes lists as the Ur Example of Cattle Punk, a steampunk subgenre.  Worse yet, the Troopers have played it before.  Here it is as the music for Season 2's opening credits.


Too bad the Troopers couldn't find a place to squeeze it in.  It might have helped improve their 18th place finish to the season.  Maybe that poor showing, the corps' worst since 2007, is why the corps has decided to return to its roots.


As for how that might look and sound, I'm hoping for a 21st Century version of the 1974 show.


Here's to the two unofficial videos lasting through the season.