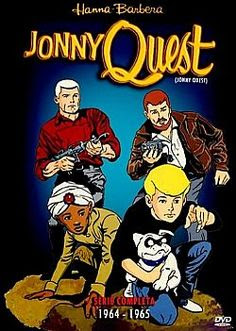 At the end of The Fall of Rome for the Ides of March, I told my readers "Stay tuned for the Sunday entertainment entry.  No zombies tonight, I promise."  Instead, I'm marking the 50th anniversary of the original run of Jonny Quest.  According to Wikipedia, the final first-run episode aired on March 11, 1965.  I reserve March 11th for observances of the anniversary of the Fukushima triple disaster, so the next Sunday entertainment entry--this one--has to do.

Like the show, I begin this entry with the theme music.  First the original.


Next, a 21st Century remake using Claymation and the full opening theme, instead of the first 90 seconds only.


Follow over the jump for a documentary about the making of Jonny Quest, presented in three parts.

This un-credited documentary about the making of the 1960's action adventure tv show is a treat! It runs well over two hours so I took it upon myself to break it into 3 segments, each segment running around 50 minutes each. Jonny Quest has always been a favourite childhood saturday morning memory and I'm so happy to have found this.

The final installment of this great documentary originally presented by Chris Webber.

I hope my readers enjoyed the documentary.  If they have the patience and time to view it and are Jonny Quest fans, they will find it worth their while.