The Fall of Rome for the Ides of March 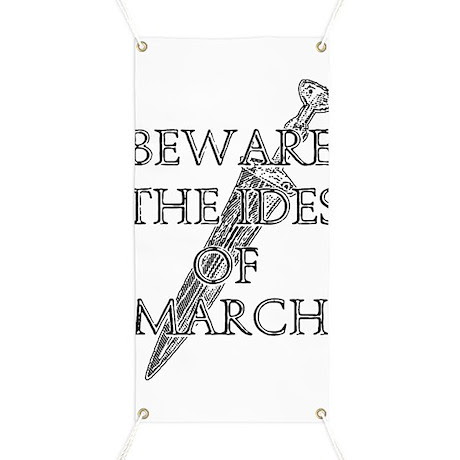 Follow over the jump for an exchange I had with John Greer the Archdruid in the comments to Bright Were The Halls Then in which I relate a story I tell my students about the fall of the Roman Empire and how it shows up in the history of the human population.

I focused on one paragraph of Greer's essay on the general trajectory of a civilization's decline and fall.

Greer: Most civilizations know perfectly well what has to be done to keep topsoil in place, irrigation water flowing, harvests coming in, and all the other details of human interaction with the environment on a stable footing. The problem is always how to meet the required costs as economic growth ends, contraction sets in, and the ability of central governments to enforce their edicts begins to unravel.

Me: I opened my lecture in my environmental science class on human population just this Monday using a graph of the human population for the past 2000 years to make this exact point. First, I describe how civilizations with effective central governments work very hard to increase human carrying capacity but the collapse of those governments results in a dramatic decrease in population as the carrying capacity falls. I then direct the students' attention to the fall in total human population that runs from 400 CE to about 700 CE on the graph. That's when the Western Roman Empire collapsed and Rome went from a city of more than one million in the late Fourth Century CE to 30,000 by the late Sixth Century CE. It never got above 50,000 throughout the Middle Ages.

In the spirit of a picture being worth 1000 words, I present a graph of the population of Rome over the past 2500 years illustrating the point. 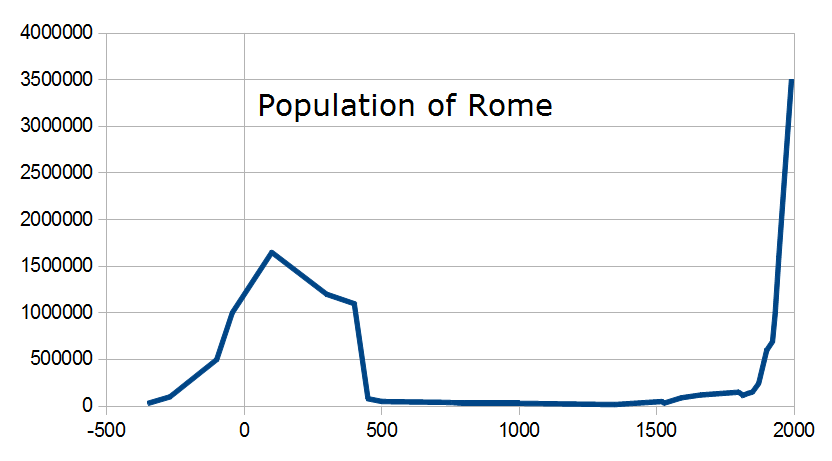 Furthermore, the total population of the European portion of the Western Empire fell from 19.5 million to 12 million between 400 CE and 650 CE. The Eastern Empire didn't collapse, but its population fell over the same period from 28 million to 16 million. (Figures according to Tulane University.)

That collapse and decline on just one of four or so Eastern Hemisphere empires can be seen clearly on the graph, and it makes a strong impression on the students.

This is the graph from the University of Michigan I show my students.

The Fall of the Western Roman Empire appears as the end of the first bump in the graph after "Christian Era."  When projected on a screen, it's quite visible and large enough to make my point.*

In case it's difficult to see either, here is a graph that zooms in on the past 2000 years.  The end of the Western Roman Empire appears as a gentle dip beginning before 500, while the Black Death presents as a much sharper drop before 1500.

I concluded my comment by shifting my attention to the other half of the empire.

As for what caused that decline even in the Eastern Empire, you nailed it when you wrote "epidemics are thus a common feature in the history of declining civilizations." One of them was Justinian's Plague, which reversed the Eastern Empire's attempt to reconquer what was once the Western Empire. Today, we have MIRS and Avian Flu, and the latest outbreak of Ebola appears worrisome.

I used this paragraph as part of the introduction to Ebola outbreak now a top story.  I'm an environmentalist; I recycle.

Pinku-sensei, bingo. The Roman model isn't the only good example of the kind, but it does make the point.

The Archdruid wasn't the only one who liked it.  Stephen Heyer said...

Thanks Pinku-Sensei for the figures on the population decrease after the collapse of Rome. I've mean meaning to track them down myself but did not get around to it.

It helps to be someone with a research background who knows how to make Google sing and dance for him.

Enough bragging.  To finish today's post, I give the standard narrative its opportunity in the form of Fall of The Roman Empire...in the 15th Century: Crash Course World History #12,

In which John Green teaches you about the fall of the Roman Empire, which happened considerably later than you may have been told. While the Western Roman Empire fell to barbarians in 476 CE, the Byzantines in Constantinople continued the Eastern Empire nicely, calling themselves Romans for a further 1000 years. Find out what Justinian and the rest of the Byzantine emperors were up to over there, and how the Roman Empire dragged out its famous Decline well into medieval times. In addition to all this, you'll learn about ancient sports riots and hipster barbarians, too.

Stay tuned for the Sunday entertainment entry.  No zombies tonight, I promise.

*The dip at the end of the second bump is the Black Plague.  I passed along the story I tell my students about it in Plague in the news and in history.