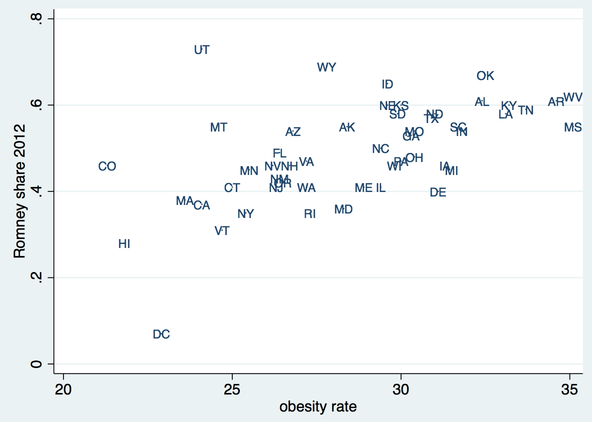 
First, yes, there is a clear correlation between obesity and Republican lean at the state level.
...
There are outliers — Utah especially, but also Montana and Wyoming, of which more in a minute, but overall the relationship is really clear. At the county level, the “diabetes belt” — that’s the CDC’s term, not mine — is clearly very Republican.

For another view of the relationship, here is a map of obesity rates among non-Hispanic Whites that Krugman also used. 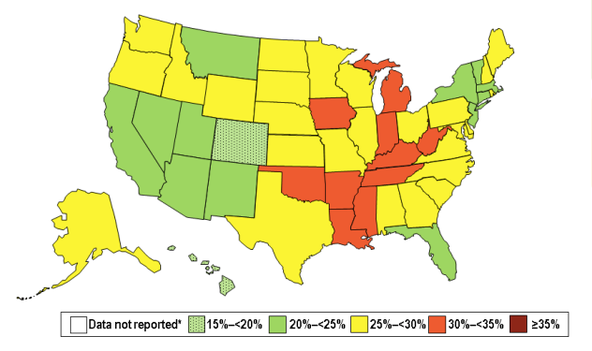 The trend is clear; states with higher rates of obesity vote Republican in presidential elections.  Only three of the states colored orange voted Democratic in either 2008 or 2012, Indiana, Iowa, and Michigan.  Only one of those states has a higher obesity rate than Michigan, Indiana, and it voted Republican in 2012.  That leaves Michigan as the fattest state to vote Democratic in the past two presidential elections.

That written, all branches of the state's government are controlled by Republicans except for the educational boards.  I wouldn't be so silly as to suggest that our obesity levels have turned us into a purple state and are in danger of turning us into a red one, but there is something going on, the same thing I described in Food Fight: thoughts on liberalism and conservatism.  Krugman himself referred to something similiar when he linked to a Bloomberg article Inside the Powerful Lobby Fighting for Your Right to Eat Pizza.


Other corners of the fast-food industry have folded against public pressure for healthier choices. Not pizza.

That was Bloomberg.  Here's Krugman.


[N]utrition and obesity have become deeply partisan. Big Pizza is now an industry as dedicated to the GOP as coal or tobacco.

People in Michigan love their pizza and that might be part of the problem.

As for what to do about this if one is a Democrat in Michigan, I have this whimsical suggestion: Go on a diet and get someone to diet with you.  That's what I'm doing right now.  Not only will it be good for your health, but it might just be good for the state's politics.

Crossposted to Michigan Liberal.
Posted by Pinku-Sensei at 9:58 AM