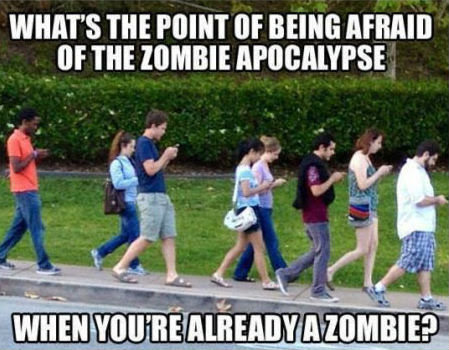 For this week's Sunday entertainment entry, I present an excerpt from Consciousness Insecurity: Modern Monsters Want You for Your Mind, Not Your Body.  It explains that the monsters that haunt modern imaginations aren't the ones that kill people and eat them, or even steal their souls, as modern industrial civilization has made people safer from harm and made people doubt the existance of souls, but ones that deprive people of their autonomy.

Consider the big themes that populate modern horror and science fiction.  The mass of humanity gets turned to mindless zombies slumping about the countryside looking for brains to consume.  Humans are turned into living batteries.  Virtual realities warp our perceptions so that we don’t understand what is real and what is not.  Aliens abduct us and perform decidedly invasive and uncomfortable experiments, and we are powerless to do anything about it.  Time travelers hop in and out, manipulating the course of history, unbeknownst to most, by tweaking essential elements here or there.  Even those classic bloodsucking vampires have morphed into irresistibly charming, ravishingly sexy aristocrats that can compel you to bend to their will with a twinkle in their eye.  Increasingly, our monsters are monsters of consciousness, that is, a control of human consciousness.  Where once the fearsome beasts of our imaginations were a threat to life and limb, now they represent a grave danger to human autonomy.  As technology continues to pervade our lives, human consciousness has expanded to encompass an interconnected world, where thought contagion spreads with a virulence that most microbes could only dream of.  Consequently, our monsters have evolved.  We may no longer have to worry about sharp teeth and claws, but we face the far more terrifying prospect of no longer being afforded a choice. In a world where we are able to reconstruct our identities at will (just change the “About” section on your webpage), the dreadest demon is the one that exerts control over who we imagine ourselves to be.  We may as well be the walking dead, for as psychologist Erik Erikson said, “In the social jungle of human existence, there is no feeling of being alive without a sense of identity”.

At first, this was a surprising take on zombies, but it shouldn't have been.  It's appeared in at least two entries on the undead.  The entire idea of zombies as a metaphor for a thought virus taking over our consciousness and depriving us of our autonomy is the entire thesis of Reblog of Mike Norman Economics: The triumph of Neo-liberalism and why we love "The Walking Dead".  It's also the punchline of the Cracked article I featured in Zombies, gangsters, and sideshows--we are the zombies.

Rick's "We Are The Walking Dead" Speech Episode 5x10 (Them)

Rick Grimes' We are The Walking Dead speech from Season 5 Episode 10 "Them." One of the most famous lines from the comics adapted to television.

As for the other personifications of our fears of losing our autonomy, EsoterX has more on modern monsters.  Stay tuned.
Posted by Pinku-Sensei at 12:46 PM