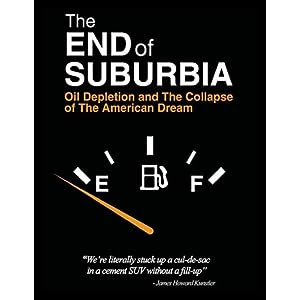 I left the following comment on The Way Out at Kunstler's blog yesterday.

I'm showing "The End of Suburbia" to my students again this week.  Other than the stats on natural gas, which have improved from the perspective of business as usual because of fracking, the movie has held up pretty well over the past decade since it came out.  Your essay drives home an updated version of the message at the end of the movie; the future will be local, not global.  As for how my students will react, in addition to making some pithy observations that I will share with you and your readers next week, I'm sure they'll search for answers on the Internet.  Here's to hoping they find my Guide to entries that contain answers to 'The End of Suburbia'; it will make things easier for them.

That I'm showing End of Suburbia convinced me to change the subject of my next retrospective to entries that got the most comments and likes this year, regardless of page views.  One of those just happens to be Guide to entries that contain answers to 'The End of Suburbia', which was posted on November 17, 2013, but earned all of its eight comments during November and December of 2014, thanks to Nebris and I going back and forth.  Consequently, it gets an honorable mention as well as pride of place so that this entry better serves my students.

The entry has also continued to earn page views.  As of this time last year, it had 321 page views as documented in Student worksheets for the second and third year of Crazy Eddie's Motie News.  By March 20th of this year, it had moved up to 836 page views.  Linking to it at Kunstler's blog added 78 more in 12 hours.  I'm sure my students will add even more this week as they search for answers.

Follow over the jump for more entries that earned eight comments during the blogging year just past as well as those that got the equivalent of five or more likes at Google Plus.

Two other entries posted during the last blogging earned eight comments, the maximum for the time period.  One of them 'Prophets of Doom', also got on the twenty most viewed list, so I will feature it as part of a regular retrospective later.  I will say that, like Guide to entries that contain answers to 'The End of Suburbia', it got its comments because of a conversation between Nebris and me.  No surprise, as it featured James Howard Kunstler.

The other was Science fiction speaks to our current anxieties.  This entry earned its comments purely from me responding to three spammers, one of whom made a repeat visit.  Because I deleted all the spam comments, only my four responses are visible.  Based on that, it loses the tie-breaker to 'Prophets of Doom', which I declare to be the entry posted last year that got its comments during the same blogging year it was posted.  Despite all the comments, the entry only managed to earn 206 page views.  Spamming did not help it.

Finally, two entries earned more +1s than all others on Google Plus.  Number one with 6 +1s was Dawn arriving at Ceres today.  All that boosting on Google Plus did little good, as it currently has only 73 page views, not even enough to earn a place in the top ten for March.  Number two was Gliese 832c and other space and astronomy news with 5 +1s.  That fared a little better with 106 page views.  Just the same, that both are space entries indicates this topic is popular over at Google Plus.

That's it for this month.  I'll be back after midnight with an entry about April's Nablopomo theme, Grow.