I concluded both Statistics for the fourth year of Crazy Eddie's Motie News and I converse with The Archdruid and his readers about Le Nain Rouge with the following program note.


Stay tuned for a post about...the top entry of the past year.

As promised and foreshadowed, the most read entry of the fourth year of Crazy Eddie's Motie News is James Robertson ABC's Person of the Week posted on February 7, 2015.  It has 1767 views according to the default counter and 1788 according to the raw counter, which I use to rank the top 20 entries each year.  It also received two comments.

Follow over the jump for how this entry earned its page views and my comments on the news story itself.

I already described how this entry got to the number one spot for the year in Montly meta: top ten entries for February 2015, so I'll be a good environmentalist and recycle.


The most read entry for February with 1767 page views is James Robertson ABC's Person of the Week, a story with a happy ending, at least in a conventional sense.  I shared it on the Coffee Party USA Facebook page and it got 565 clickthroughs in 2 days.  Then I promoted it at Kunstler's blog the next Monday.  Not only is it the most read entry of the month, but it's now the second place post of all time, knocking "Ayn Rand on love and sex" out of the top ten after less than a month.


Kunstler: Waiting in the wings is a whole category of human endeavor quaintly known as virtue, lately absent in the collective consciousness. What a shock it would be if Americans began to witness acts of fortitude and valor among us.

Me: Americans saw an act of fortitude met with virtue last week when they heard about James Robertson, a Detroit resident who walked 21 miles of his commute each day.  The result was that he received $300,000 in donations and a new car.  As is our media's wont, this was turned into a feel-good story as ABC News named Robertson their Person of the Week.  While this was a success of charity, it displayed the failure of metro Detroit to provide adequate public transportation.  The response also sent a message that Americans think that car dependence is a virtue, not a vice.

That was met with an ignorant response and a hostile one.  First, the ignorant one from outsider.


I was wondering why Robertson didn’t just move closer to his job. Looks like now he can retire.


The world knew when walking worker James Robertson toted up $360,000 and a new car, which put him in danger in his old Detroit neighborhood, he told police. Now he's in a secret apartment in suburbia.

Now that he can afford to move, he has.

Now for the hostile one from michigan_native.


Bullshit. Nobody walks no 21 miles in Detroit without an armored escort and lives to talk about it. Fuck that, not possible.

I decided to tell him off.


He did his walking in the Oakland County suburbs, not Detroit proper. He rode the bus from Detroit out to the end of service more than 10 miles away from his job in Rochester Hills. Also, there were witnesses. You’d have known all that if you had actually clicked on the link and watched the video.

It turns out that's not entirely true, as the following map shows. 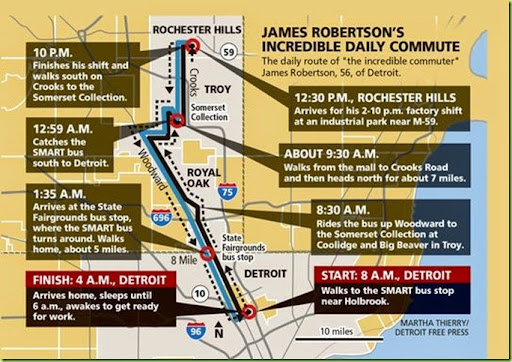 Still, that's a relatively safe part of Detroit and a very quiet time of day to walk.  One of the things that strikes me about Detroit is not its danger, but its emptiness.  I'm sure that's what Robertson experienced in the wee hours of the morning as he walked down Woodward.  As for telling michigan_native that, he can find out for himself.  I'm not interested in helping him correct his understanding any more.

Stay tuned for a delayed entertainment entry about "Insurgent," the sequel to Divergent as well as more retrospectives.