Alice Cooper for Friday the 13th 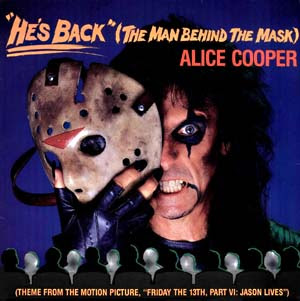 In the comments to Ted Nugent shoots mouth off about Pure Michigan ads, I mentioned a brush with fame in an exchange in the comments.


Lindsay: My Dad's band opened for Ted Nugent once. I used to be proud of that --- my Dad shared a stage with somebody famous! --- but now I am ashamed.

Me: "My dad shared a stage with someone famous!"

So did I. I was in a marching band that paraded around the stage at Anaheim Stadium at the finale of Alice Cooper's show playing "Battle Hymn of the Republic" in 1977. Honestly, your dad had the better gig, as his band's name was on the marquee.

As for being ashamed, hey, I doubt anyone knew what a dick Nugent would become back then.

I've stayed away from the horror movie franchise until now, but I couldn't resist Alice Cooper.

Thus begins another string of holiday posts, much like the one last month that began with Evolution humor for Darwin Day and ended with Happy Year of the Wood Sheep!  Today is Friday the 13th, tomorrow is Pi Day, Sunday is both The Ides of March and when I post my entertainment entry, Tuesday is St. Patrick's Day, next Friday is the Vernal Equinox, and next Saturday is Nowruz, the birthday of the blog.  Oh, and the Sunday after that is the day of Marche du Nain Rouge.  Don't expect a lot of DOOM for the next nine days!
Posted by Pinku-Sensei at 9:09 AM