Time for a Scott Walker label 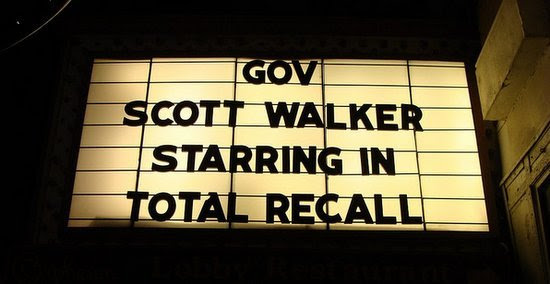 
I normally don't talk state politics, but lately you can't go anywhere without hearing that Scott Walker is the frontrunner for the Rebublican nomination for president by running Wisconsin into the ground. Seriously, despite all the corruption probes, Walker's term has been, from a purely objective, nonpolitical standpoint, an unmitigated disaster.

The next paragraph mentioned that "We lost an opportunity to invest in new infrastructure - the light rail money instead went to California and the jobs left the state."  That prompted me to search my blog for posts about Scott Walker and the first one to catch my eye was Why do Tea Partiers hate high-speed rail?  That was four years ago and he has only gotten worse.


The very specific promises Walker made for job growth were conveniently forgotten (150,000 new jobs!!!). The emphasis on busting unions and holding down wages has - surprise, surprise - not caused the state economy to blossom, and the state is even back in the red, despite cutting services and raising fees, because Walker has doled out so many tax cuts to the very rich.

So here is a list of the most recent hits, starting with a 220 million dollar subsidy to the billionaires of the professional sports cartel while cutting 300 million from my alma mater, the University of Wisconsin...

Read the rest at The Hipcrime Vocab.  Scott Walker has been a busy (and bad) boy.

Chad's post reminded me that now that Scott Walker is a leading GOP candidate for President, I need a label for him.  How does Total Recall sound? It will fit right in with calling Romney Willard the Rat, Santorum The Froth, and Rand Paul Aqua Buddha.

Time for me to find all the relevant entries and add the label.  See you later; I'll be busy!
Posted by Pinku-Sensei at 12:00 AM