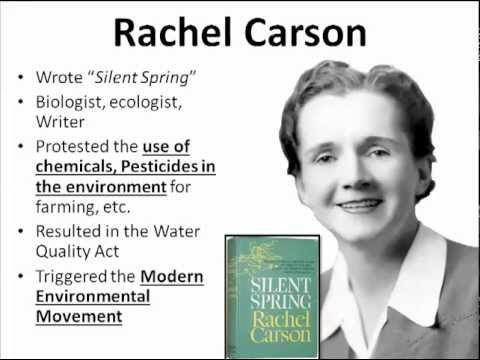 Today's prompt asks this month's Nablopomo participants to "Write an open letter thanking a historical figure for her contributions to the world."  As soon as I read that, I knew who I wished to address, Rachel Carson.*  It's an obvious choice for me.  Like me, she was a biologist and writer.  She was also the founding mother of the modern environmental movement, a fellow Crazy Eddie who saw our society doing something that put it and the environment supporting it on a path to disaster and shouted "Stop!"  It took ten years, but society heeded her warning and stopped using DDT for all purposes other than fighting malaria in Sub-Saharan Africa, delaying or even preventing the extinction of dozens of bird species, including the Bald Eagle and the Brown Pelican.**  For all those things, I am thankful.

Oddly enough, I've only written about her once before in the four years of this blog, as the subject of the second part of Field trip highlights, where I embedded a video about an exhibit showing Michigan State University's contributions to "Silent Spring" and described visiting the museum.  Here is the relevant portion of the entry.

As for what my students and I saw on the field trip proper, here's a video of an exhibit at the MSU Museum, our second stop of the day.

Fifty years have passed since the publication of Rachel Carson's Silent Spring, the book many credit with sparking the environmental movement. The book has deep connections to Michigan State University, from the late MSU ornithologist George Wallace's research that was featured prominently in the book to the establishment of the Rachel Carson Chair in Sustainability at MSU and a legacy of environmental science being conducted today.

My students and I saw those robins on display, along with other exhibits. I hope that made an impression on them. It did on me.

It made enough of an impression on me that I added the video to my lectures and have shown it every semester since.  Even though the exhibit is long over, the video about it continues to impress my students.

Once again, thank you, Rachel Carson.

*I'd like to think I did a better job than my response to the last prompt that asked me to write a thank you note, The dolphins thank Earth for the fish.  That one asked participants to "Write a thank you note to the earth or Mother Nature."  I linked to other thank you notes and decided to go for a laugh instead.

**I tell my students the story of the near demise and recovery of the Brown Pelican colony on West Anacapa Island based on my time as a National Park Ranger.  I'll save it for another entry.