Al Jazeera America shutting down as oil subsidy dries up 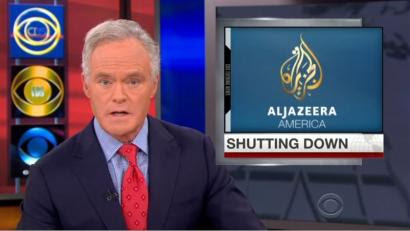 Three years ago, I was asking Will Al Jazeera America hire Keith Olbermann?  (The answer was no.)  A few months after that, I announced that Al Jazeera America was premiering that day.  The next year, the cable channel contacted me as a source for a story.  I enjoyed that.

Now, I have sad news to report via USA Today: Al Jazeera America to shut down.

The cable news network will be phased out by April 30, according to a memo that was emailed to staffers Wednesday. "As many as 700 staff members" could lose their jobs, CNN reported, citing unnamed sources. Al Jazeera couldn't be immediately reached to verify the number of people affected by the move. The NewsGuild of New York, the union that began representing 46 digital journalists at Al Jazeera America last year, says it was told by the company that it has a total of 291 employees.

Al Jazeera Media Network, which is funded by the government of Qatar, launched the U.S.-based network in August, 2013 after buying Current TV, the cable news channel co-founded by Al Gore, for about $500 million earlier in the year.

The decision to go out of business was “driven by the fact that our business model is simply not sustainable in light of the economic challenges in the U.S. media marketplace,” AJAM CEO Al Anstey was quoted as saying in an AJAM report.

TomoNews US includes their snarky speculation about what made their business model unsustainable in Al Jazeera America shutting down: AJ pulls the plug on U.S. operations as oil prices plunge.

Many are speculating that plunging oil prices ultimately led to the channel's demise as Al Jazeera is owned by energy-rich Qatar.

It didn't help that no one was watching, with prime-time ratings sometimes struggling to exceed 30,000 viewers.

Looks like oil falling to 12-year lows dragged more than stocks down with it.  I'm sorry to read this, as I appreciated Al Jazeera's investigative reporting and presentation without sensationalism.  In that, I'll echo what Al Jazeera America CEO Al Anstey wrote in an email to his employees: "I know the closure of AJAM will be a massive disappointment for everyone here who has worked tirelessly for our long-term future. The decision that has been made is in no way because AJAM has done anything but a great job. Our commitment to great journalism is unrivaled."
Posted by Pinku-Sensei at 11:29 AM