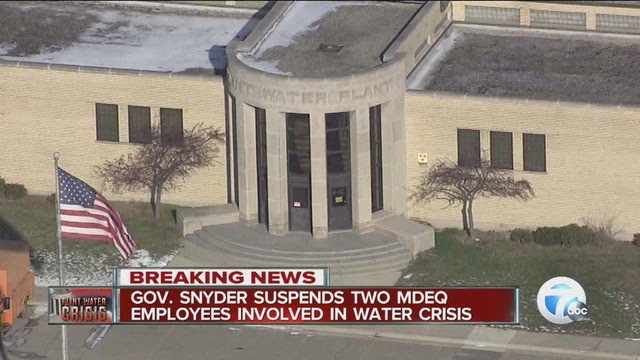 Yesterday, I wrote that "I expect more resignations and firings to come" in the wake of the resignations of the MDEQ Director and the regional EPA Director.  It didn't take long at all for that to begin to happen as WXYZ reported two MDEQ workers suspended in Flint water crisis later that same day.

Governor Snyder has suspended two workers at the Michigan Department of Environmental Quality for their roles in the Flint water crisis.

The Detroit Free Press has more.


Gov. Rick Snyder announced the suspensions of two Department of Environmental Quality officials Friday afternoon, but if the state determines those or other workers need to be fired for mishandling the Flint water crisis, it could take more than a year to make it final.

Snyder said in a news release Friday two DEQ officials are suspended pending an investigation, in accordance with civil service rules. Although state officials wouldn’t reveal the names of the employees, they said they were managers within the Water Quality division of the MDEQ.

They were suspended without pay, although under civil service rules, the unpaid status can only last seven days. The internal investigation into further action against the two employees should take a couple of weeks, said Kurt Weiss, spokesman for the state’s department of Technology, Management and Budget. After seven days, they’ll go back on the payroll.

Once the investigation is complete, the action taken against the employees can range from getting their job back to getting fired, Weiss said.

So these suspensions may not be the ones to completely satisfy the prediction.  That's OK.  There are more dominoes to fall.

Speaking of falling dominoes, some have already toppled.


At the Department of Environmental Quality, two key employees — Liane Shekter Smith, who was the chief of the DEQ’s Office of Drinking Water and Municipal Assistance and Stephen Busch, a district manager in the drinking water division for MDEQ, whose area of responsibility included Flint — have been reassigned and no longer have any role in dealing with the Flint water crisis. An undetermined number of other employees in the drinking water division no longer have any role in the Flint water response, said Melanie Brown, a spokeswoman for the department.

Consequences may still be coming for high-level people, including the Emergency Manager for Flint at the time of the switch, Darnell Earley.  He can't be fired from that position, but he's currently the Emergency Manager for the Detroit Public Schools, which is currently having its own crisis, which includes environmental issues from poor maintenance of school buildings, resulting in teacher sickouts.  The New York Times has that story and more in Anger in Michigan Over Appointing Emergency Managers.  I recommend my readers read it, too.
Posted by Pinku-Sensei at 10:21 AM