Congressional hearings on the Flint water crisis and a resignation 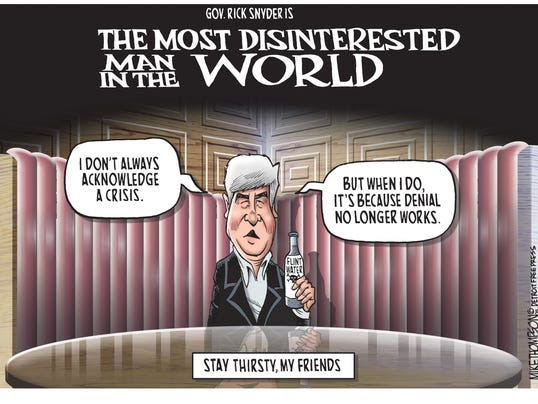 I wrote yesterday that I didn't have much to say about the Flint water crisis until it got national attention.  Has it ever!  Wednesday, President Obama spoke on the issue while visiting the North American International Auto Show.  Yesterday, WXYZ reported on two more responses by the federal government.  First, Congressional hearings to be held in Flint water crisis.


As the caption read to an earlier version of this report, "Governor Rick Snyder will be requested to testify at U.S. Congressional hearings in connection to the Flint Water Crisis, according to the office for U.S. Representative Brenda Lawrence."  That suggests to me that this is enough of a problem for national Republicans (thank you Hillary Clinton) that they have decided to do damage control.  Whether this will take the form of trying to save Snyder by making it look like a local problem or throwing him under the bus, I don't know.  I hope it's the latter.*

Speaking of throwing people under the bus, the report above mentioned an EPA regional adminstrator resigning.  Here's the clip from WXYZ on that part of the story: EPA administrator resigns amid Flint water crisis.

An EPA administrator is out of a job, and her agency is cracking down on the response to the Flint water crisis.

She's the second official to resign over the scandal, joining Michigan Department of Environmental Quality Director Dan Wyant.  I expect more resignations and firings to come.

*But probably not.  Instead, this quote from Representative Jason Chaffetz, chairman of the House Oversight and Government Reform Committee, indicates they have one of the GOP's favorite targets in their sights instead, "The EPA is rife with incompetence and Region 5 is no exception. Mismanagement has plagued the region for far too long and Ms. Hedman’s resignation is way overdue."  The same article reports that the U.S. Department of Justice is investigating the EPA as well, so the concern is bipartisan.

As for Snyder, the just thing may be that he should resign, but I don't expect the just thing to happen any time soon.  That would give Michigan Governor Brian Calley as an incumbent in 2018.  Neither Attorney General Bill Schuette nor the more pragmatic Democrats who would run for the office would want that.  Better to campaign against lame duck Snyder for an open seat.
Posted by Pinku-Sensei at 9:00 AM