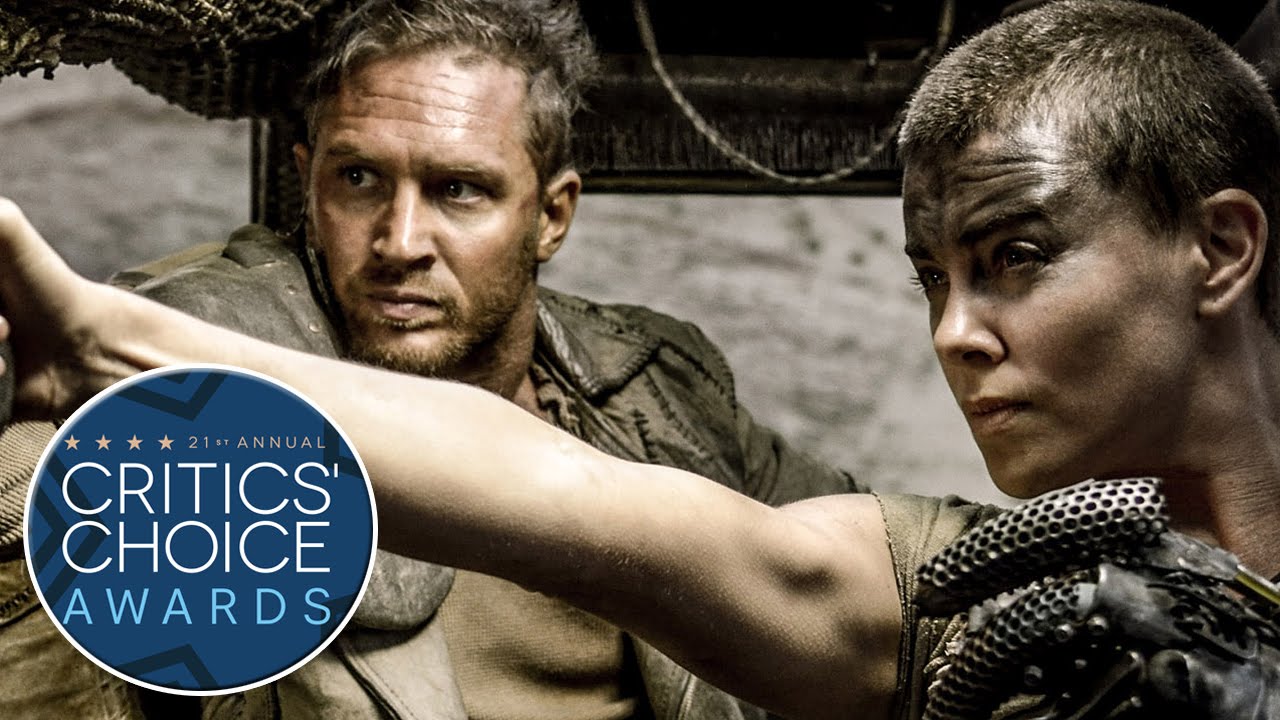 Speculative fiction nominees did much betterat the Critics' Choice Movie and Television Awards than last year, although the result was the opposite, at least for the movies, than for the Golden Globes, where "The Martian" won two awards.  Sunday night, "Mad Max: Fury Road" was the big winner, while "The Martian" was shut out.  The movie won Best Production Design, Best Editing, Best Costume Design, Best Hair and Makeup, Best Visual Effects, and Best Action Movie, while George Miller won for Best Director, Charlize Theron was named Best Actress In An Action Movie, and Tom Hardy won Best Actor In An Action Movie.  As I wrote on Sunday, "What a lovely day!"

"Mad Max: Fury Road" lost Best Picture to "Spotlight" and Best Science Fiction/Horror Film to "Ex Machina," both of which I expected.  In fact, I wrote "'Ex Machina' might sneak on past ["Mad Max: Fury Road" and "The Martian"].  After all, it's the critics voting, not the movie-makers."  In addition, Brie Larson won Best Actress for "Room," which she also won at the Golden Globes.  That's no surprise, either.  Just the same, between the Golden Globes and the Critics' Choice Awards, it's been a great year for science fiction at the box office, and that's not even counting "Star Wars: The Force Awakens, which had to be added to the Critics' Choice Awards and is finally getting full consideration at the BAFTA Awards and Academy Awards.

Speculative fiction didn't fare as well on the television side, as only Carrie Coon of "The Leftovers" won for Best Actress in a Drama.   Given her competition, that's quite an accomplishment.  Unfortunately, it looks like I jinxed "Face Off."  Instead, "The Voice," which I thought might win last year, got another trophy.  Also, "Fargo" swept the Limited Series/TV Movie category, shutting out "American Horror Story: Hotel."

ETA: "Outlander" won Most Binge-worthy, yet another victory for speculative fiction.

Follow over the jump for the acceptance speeches from A&E.

I'm glad to see "The Brides" get a moment in the spotlight.  Without their characters, there would be no movie.

On behalf of the cast and crew of "Ex Machina," actress Alicia Vikander accepts the award for Best Sci-Fi/Horror Movie and reads remarks from its writer/director, Alex Garland, at the 21st Annual Critics' Choice Awards (January 2016).

It was a good night for Vikander, as she also won Best Supporting Actress in a Drama for her role in "The Danish Girl."

"Star Wars: The Force Awakens" may not have won any awards in its own right, but it made an appearance on the stage anyway when Industrial Light & Magic Honored with the Genius Award

Carrie Coon accepts the award for Best Actress in a Drama Series for her work in "The Leftovers," presented by John Stamos and Josh Peck, at the 21st Annual Critics' Choice Awards (January 2016).