The Wrap's predictions for a diverse set of acting nominees this year.  None were nominated.

I concluded Speculative fiction at the Critics' Choice Movie and Television Awards by telling my readers to "Stay tuned for an entertainment-themed Martin Luther King Day entry on the same theme as last year's."  That post lamented "Selma" being relatively snubbed by the Oscar voters, earning only nominations for Best Picture and Best Original Song when a lot of critics thought that the film's male lead and director deserved nods as well.  That was still better than this year, as Wochit Entertainment reported in Oscars Still So White?

Oh, no, not again. For many movie fans, Thursday's Oscar nominations brought a dispiriting feeling of deja vu. For the second consecutive year, no minorities were nominated in any of the four acting categories. One year after the critically acclaimed "Selma" was largely snubbed by academy voters, sparking protests, actors and filmmakers of color are again being ignored -- and Twitter is not happy. "It's actually worse than last year. Best Documentary and Best Original Screenplay. That's it. #OscarsSoWhite," tweeted April Reign, an editor who was credited with launching that hashtag in protest after last year's nominations were announced. Idris Elba had been expected to score a nomination for his performance as an African warlord in "Beasts of No Nation," but he was passed over. Other hopefuls such as "Concussion" star Will Smith, "Creed" star Michael B. Jordan, that movie's writer-director, Ryan Coogler, and the cast of N.W.A biopic "Straight Outta Compton" also were ignored.

Of all the listed actors not nominated, FiveThirtyEight thought the biggest snub belongs to Idris Elba.

One of the biggest upsets of the morning was in the supporting actor category. While Mark Ruffalo (“Spotlight”), Tom Hardy (“The Revenant”), Mark Rylance (“Bridge of Spies”) and Sylvester Stallone (“Creed”) were all favored by Paddy Power (which set odds for winning an award, not for being nominated), Christian Bale’s nomination for “The Big Short” was totally remote, as of data pulled midnight before the nominations were announced. That means Idris Elba (“Beasts of No Nation”) and Michael Keaton (“Spotlight”) lost out big. Elba had 6-to-1 odds of winning it all, according to the bookmakers, which gave him the third-likeliest score behind Stallone and Rylance. And although Keaton was a relative long shot to win, at 8-to-1 odds, he was still considered a more probable candidate than Ruffalo, Hardy or Bale.

Elba being left out was particularly surprising, as he was nominated for a Golden Globe (he lost to Sylvester Stallone), a BAFTA Award, and three SAG Awards (two for his film perfomance and one for a TV role).  The actors and foreign press were certainly behind him, even if the rest of the voters were not.  Follow over the jump for why that might be the case.

Two years ago, The Atlantic posted the following infographic to illustrate the point of Oscar Voters: 94% White, 76% Men, and an Average of 63 Years Old. 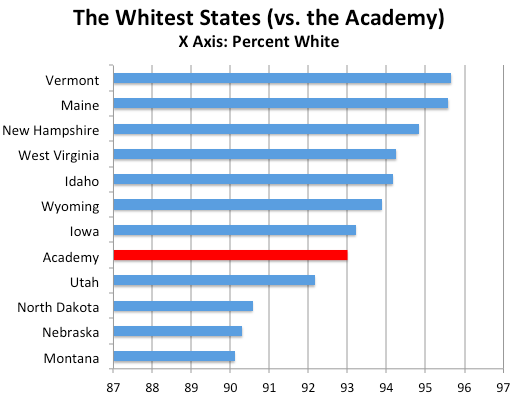 The Academy's voting members are whiter than Utah.  That's saying something!

Here's another graphic from The Mirror illustrating the point another way. 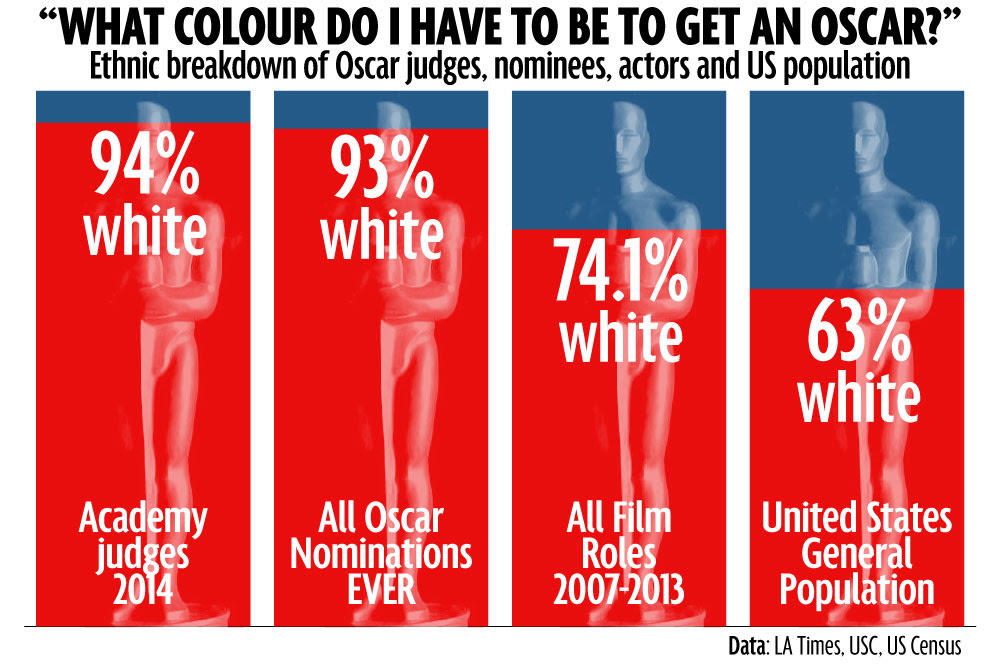 This is getting to be such an issue that the AP reported Diversity a Hot Topic at Critics' Choice.

Brown and Rodriguez were philosophical about the issue, while Howard mentioned the lack of recognition for female directors, which is part of the gender equity problem in Hollywood.  That issue seems to be getting addressed, as actresses are demanding and getting equal pay with their male co-stars.

The plight of women in film was also mentioned in the Wall Street Journal's Oscar Nominations: Black Actors and Directors Shut Out.

The 88th Academy Award nominations were announced Thursday morning and diversity is a flashpoint for the second consecutive year. WSJ's Erich Schwartzel joins Lunch Break With Tanya Rivero with details.

The video skipped right over a bright spot for diversity, which is the nomination of Alejandro González Iñárritu, who won last year for "Birdman" and is a favorite to win for "The Revenant."  He won the Critics' Choice Award last night.  Those awards should be the subject of my next entertainment-related post when I follow up on the winners among the speculative fiction nominees.

Oh, and Happy MLK Day!  Be sure to balance out thinking about diversity and social justice with some fun.  I will, as I play Star Wars: The Old Republic, which celebrates a movie franchise that is discovering the value of diversity.