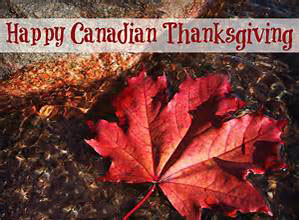 Happy Canadian Thanksgiving!  I'm celebrating today by featuring two reasons that Canadians should be thankful.  One of them was the subject of last year's entry for the holiday, Justin Trudeau.  Here he is before the United Nations last month in Trudeau UN speech shines global spotlight on Canada's Indigenous issues from CBC's The National.

PM Justin Trudeau conceded that Canada is flawed and drew attention to the current plight of Canada's Indigenous people in his second-ever speech before the UN General Assembly today.

While it is not the most positive portrayal of Canada, Trudeau is at least willing to own up to his country's faults, as few as they are, and is interested in rectifying them, not only for the First Nations people directly affected, but to enhance Canada's standing in the world.  Canada should be thankful for that, as the U.S. currently doesn't have a leader like that.

Trudeau is not the only leader Canada should be thankful for.  While he is the head of government, he isn't the head of state.  Former astronaut Julie Payette is the Governor General of Canada.

From astronaut to Governor General: Julie Payette journeyed to space twice, but her next mission at Rideau Hall is expected to come with its own kind of challenges.

Canadians should be thankful to have someone as accomplished as their head of state.  I wish we had a former astronaut as President!

Trudeau's remarks about the plight of the First Nations in Canada, reminds me that it's also Indigenous People's Day or Native American Day here in the U.S.  It's also a day to celebrate the real first European to land in North America, Leif Erikson.  Follow over the jump for more on both from National Day Calendar.

Native American Day is observed annually on the second Monday in October. While it is not celebrated in all 50 states, it is recognized in both California and South Dakota while gaining popularity in the rest of the nation.

On October 9, 1825, a sloop named, Restauration, with 52 Norwegian Quakers on board, landed in New York Harbor beginning what would become the first organized immigration from Norway to the United States.  In commemoration of their journey and their exploring ancestor, Congress selected October 9 for National Leif Erickson Day.