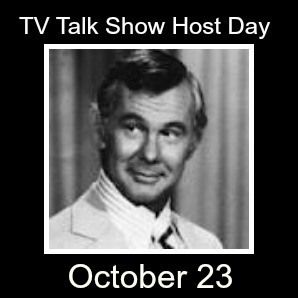 Talk shows come in a variety of platforms.  Daytime talk shows provide a combination of current events, health updates, technology news, and entertainment. The later the hour, the more comedy the TV talk show host dishes out. From practical jokes, impersonations, and sketches to games, sidekicks and audience participation.  Guests usually star in an upcoming film or made headlines for a stunt, good deed or unusual invention.

Each day we watch our favorite talk shows, and we laugh, cry, listen and learn. It is these great hosts that make the shows ones that we want to watch.

Watch your favorite TV talk show host and use #TVTalkShowHostDay to post on social media.

National TV Talk Show Host Day was chosen to be celebrated on The King of Late Night Television’s birthday.   John William “Johnny” Carson was born on October 23, 1925.  Carson was the host of The Tonight Show for thirty years (1962 – 1992).

To celebrate, I have recent clips from all the variety talk shows nominated at the Primetime Emmy Awards, beginning with "Last Week Tonight with John Oliver," winner of four Emmy Awards.  Follow over the jump!

The most recent clip of the most award winning variety talk show on YouTube is Equifax: Last Week Tonight with John Oliver (HBO).

John Oliver discusses the massive impact of the cybersecurity breach at Equifax and their massively misguided attempts to mitigate the damage.

Next, I present clips from Samantha Bee and Trevor Noah, who won one Emmy Award each.  First, Listen Up, Creeps: Weinstein Edition | October 11, 2017 Act 1 | Full Frontal on TBS.

Harvey Weinstein is just the tip of the douche-berg. Listen up, creeps of Hollywood, we know who you are.

Other hosts will talk about Weinstein later.  In the meantime, here is Trevor Noah giving his monologue Trump Feuds with Gold Star Families: The Daily Show.

Trevor breaks down how President Trump turned an ordinary press conference into a feud with Gold Star families.

I should watch "The Daily Show" more often.

Stephen samples each of Trump's five border wall models that were built in San Diego.

Of all the primetime network talk show hosts, Colbert is my favorite and this clip shows why.

I wrote that other hosts would examine the Weinstein scandal.  Seth Meyers does so in Harvey Weinstein, Donald Trump and Systemic Sexism: A Closer Look.

Seth Takes a closer look at how powerful men in entertainment and politics - from Harvey Weinstein to Donald Trump - abuse their power to silence, bully or coerce.

It's time for a lighter touch, so here's The Tonight Show Starring Jimmy Fallon in Trump Meets President of Virgin Islands, This Week in Words - Monologue.

Normally, I'd put Jimmy Kimmel here, but I'm saving him for last.  Instead, I have James Corden reporting Another Report Claims Trump Is Losing It.

James looks at the new Vanity Fair report outlining President Donald Trump's alleged unraveling, saying he hates nearly everyone in the White House, basically making him the head of a reality show, again.

No collection of late night talk show hosts would be complete without Conan O'Brian, and, yes, even he was nominated for an Emmy.  Here is his interview Senator Al Franken: My Staff Had To Reign My Humor In - CONAN on TBS.

The senator wanted to respond to Justice Scalia’s "terrible, obnoxious" marriage equality dissent with a joke, but his staff wasn’t laughing.

Conan doesn't put his monologues on YouTube, but I needed to include an interview, so it might as well be him.  It turned out to be pretty good.  Besides, at least it wasn't Colbert interviewing him, which I could have posted instead.  Yes, I can be that mean.

Brooklyn is unlike anyplace else on Earth and as a final farewell, Jimmy thanks all the many restaurants, coffee shops, donut shops, ice cream shops and all the other establishments who sent us food.

That was the most fun time I've spent watching YouTube as research for a post.  I should do that more often.
Posted by Pinku-Sensei at 9:58 AM