A Happy Food Day to my readers!  Today, I'm continuing what I did last year in For Food Day, a guide to entries with answers to 'Food, Inc.' by discussing the worksheet for "Food, Inc."

When I showed "Food, Inc." to my students last week, I asked them which questions they had the must difficulty answering.  The ones that stumped them that I hadn't already answered involved Joel Salatin, owner and operator of Polyface Farms.  I can understand that.  The man has a complex and effusive way of speaking that throws out a lot of concepts in a short period of time.  It doesn't help that he also misuses words.  He says "spacious" instead of "specious" and "mystique" instead of "illusion."   The irony is that he has an English degree.

Watch Sustainable Solutions to Food Production, which puts together two of the three segments in which Salatin appears, then follow along as I use it to answer the questions below.

Is this the smartest man in the USA, or just a farmer with common sense? Please check out the documentary film "Food Inc.", and read Fast Food Nation. You deserve to know what you're eating. Note: for those who may be squeamish, please realise that the chicken you eat is no longer alive. This is a humane and relatively painless way of killing the animal.

Now time for the questions.

19. How does Joel Salatin, owner-operator of Polyface Farms, describe the advantages and disadvantages of industrial agriculture?

The advantages, which Salatin breezes through sarcastically, are that industrial agriculture grows food "bigger, fatter, faster, cheaper."  That's exactly what industrial agriculture is supposed to do.  The disadvantages are that it creates a lot of inefficiencies and externalities and removes the people who make decisions from the consequences of their decisions.  As a result, "no one is thinking about E. coli, Type II diabetes, and the ecological health of the whole system."  This also serves as an example of "There is no such thing as a free lunch," although there are better examples elsewhere in the movie. 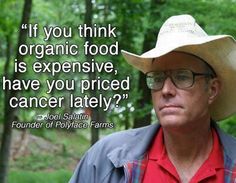 20.What advantages does he give for his methods of organic farming?  He’ll explain more after you watch the material for questions 21-23.

Salatin describes how his pasture raised cattle handle food and waste a lot more efficiently than cattle on feedlots.  Salatin does not have to pay for the food and he does not have to pay to dispose of the manure.  Instead, the natural way of doing thing takes care of both.  As I sometimes tell my students, he manages to screw up a perfectly good explanation of "Nature knows best."

He thinks the people who do not respect "the pigness of the pig," will treat other people and other countries in the community of nations as disdainfully as they do the pigs and will try to control them the same way.  The film then jumps to a segment about Smithfield Farms that supports Salatin's contention.

24.How do the views of the owner of Polyface Farms and that of the former owner of Stonyfield Farm differ when it comes to growth and selling to Wal-Mart?

Salatin says he absolutely won't sell to Wal-Mart.  He thinks he will lose his integrity if he does, as he'll have to change what he thinks about his business, his product, and his customers.  On the other hand, Gary Hirshberg of Stonyfield Farms thinks he absolutely has to sell to Wal-Mart for his ideas to have any effect.  Watch him in Food, Inc. – Walmart's Going Organic.

What AN INCONVENIENT TRUTH was to the energy industry, Robert Kenner’s Academy Award-nominated documentary is to big agriculture. Based on Michael Pollan’s bestselling book of the same name, FOOD INC. examines the outrageously unhealthy practices of corporations like Monsanto and Perdue, exposing how little we really know about what we put on our plates. A must-see for proponents of sustainable and organic farming movements and anyone concerned about the future of our planet.

Both Salatin's refusal and Hirshberg's eager collaboration are examples of "A value expressed and a decision made based on that value."  It's a contrast I set up early in the semester, when I use Salatin as an example of someone who follows an ecological economics model and Hirshberg as someone who follows an environmental economics model.  Both agree about the importance of sustainability in economics, but they disagree about how to achieve it.  Salatin is setting up his own food distribution system, while Hirshberg is trying to reform the existing one.  I'm on Hirshberg's side; if the system can be improved, then it should be.  At least Salatin isn't doing what James Howard Kunstler advocates -- letting the system collapse first and hoping that something more sustainable will grow out of the wreckage.

That's it for today's observation of Food Day.  Stay tuned for a report on "The Rachel Maddow Show" winning two News and Documentary Emmy Awards, one for its coverage of the Flint Water Crisis.
Posted by Pinku-Sensei at 9:27 AM