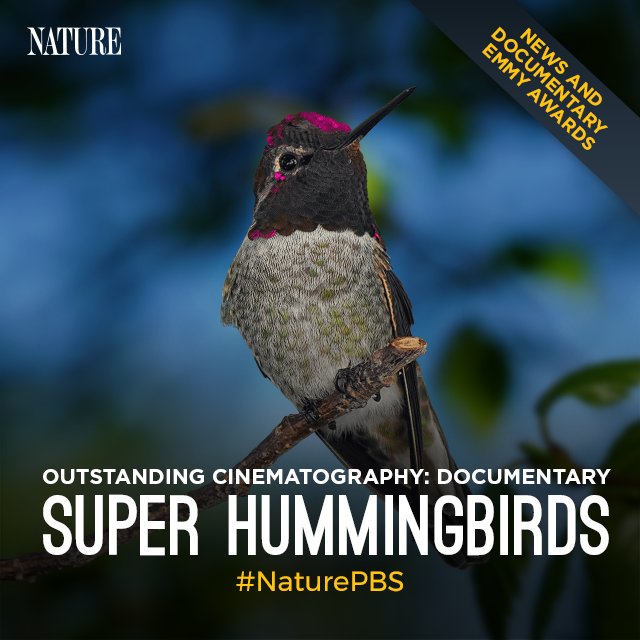 I noted my intentions for today in the introduction to 'Sonic Sea' wins Outstanding Nature Documentary and Outstanding Music and Sound and returned to it to conclude yesterday's entry.

The nominee that earned the statue for  was the episode that I featured in Nature documentary nominees are well photographed at the 2017 News and Documentary Emmy Awards, "Nature: Super Hummingbirds."  Here is Katty Kay presenting the award.


To celebrate, here are two clips from Nature on PBS that show both the "super hummingbirds" and the amazing camera work that captured them.  First, Hummingbird's Face Resembles Baby Octopus.

Do female Costa's hummingbirds really find this look attractive?
...
Spring is the time to nest for the Costa's hummingbirds, before the desert gets too hot. Both males and females are looking for a partner, but it's up to him to impress her. Though his back shimmers with green, it’s not until we get her point of view that we see his true splendor. He flexes the iridescent feathers of his mantle until they become a glowing mask of violet.

Next, Hummingbirds Battle in the Air.

Hummingbirds may look cute, but they have a fierce warrior within.
...
Hummingbirds sometimes use their unmatched flying skills for something other than feeding on flowers--for fighting over them. Flowers in full bloom are a call to arms. It’s fight and flight – a display of skill and fiery tempers.

I don't know if I'll use these videos in my classes, but I certainly will recommend this show to my students for extra credit.  In fact, I did so yesterday.

I will return to the winners of the News and Documentary Emmy Awards next week after I wish my readers a Happy Wester tomorrow.  Stay tuned.
Posted by Pinku-Sensei at 12:00 AM