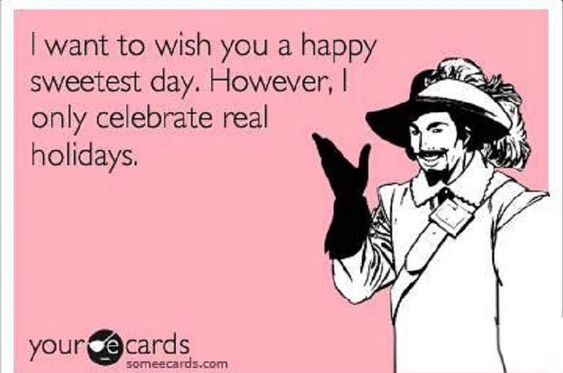 Happy Sweetest Day!  Despite what the image says, I do consider Sweetest Day to be a real day worth celebrating, especially since it has proved to be a very popular
holiday here at Crazy Eddie's Motie News.*  In addition, it turned 100 last year and it was born in Detroit.  Here's the story from National Day Calendar.

Just in time for its 100th Anniversary, National Sweetest Day encourages everyone to be generous even in the smallest ways.  From its inception as Candy Day in 1916, this day reminds us that even small tokens improve the lives of those around us who are suffering or going without.  While the day may have begun with candy and sweets, encouraging us to take home sweets to our sweethearts and friends, it is a day full of lessons in persistence, resilience and doing small things in greatly.
...
National Sweetest Day found its beginnings in a holiday founded by the National Confectioners’ Association in 1916 called Candy Day.  On October 14, 1916, candy shops around the country filled newspapers announcing their sweetest treats and delights.  Originally designated to be celebrated the second Saturday of every October, the confectioners’ convention in Detroit in May of 1916 made the final resolution. Walter C. Hughes, the secretary of the National Confectioners’ Association, encouraged Americans to patronizes their local candy shops, bakers, and druggist for the highest quality confections.

The earliest mentions of the “Sweetest Day of the Year” were in several advertisements found in Indiana, Minnesota, and Texas newspapers.  It was not the official name of the day – not yet.

In 1917 with war raging in Europe, many retailers encouraged patrons to “Get one for yourself and one for the boys overseas!”

By April of 1918, the United States officially entered the war in Europe and with that came rationing.  Sugar, as well as many other commodities, became scarce.  The holiday that was starting to see such success was shelved.

With the end of the war in 1919, sweetness returned to October.  So sweet in fact, Candy Day became an entire week.  Then in 1923, the day kicked into the full charitable swing.

Sweetest Day’s theme of charity and giving became apparent in 1921 when the Detroit Retail Confectioners, Detroit Wholesale Confections Club, Detroit Jobbing Confectioners Association and the Michigan Confectioners Club joined forces with the Red Cross to distribute thousands of bags of candy to hospitals, orphanages, shelters and homes across Michigan. The celebration also included 100 regulation army target balloons which dropped coupons worth a box of candy.

In 1929, Sweetest Day settled into its current home, the third Saturday in October.

Yes, it's a very Michigan holiday.  No wonder I had never heard of it until I moved here from California.

I conclude with the song that I've associated with this day ever since I first heard of it, "Sweetest Day" by Control Freq, a Detroit area band.