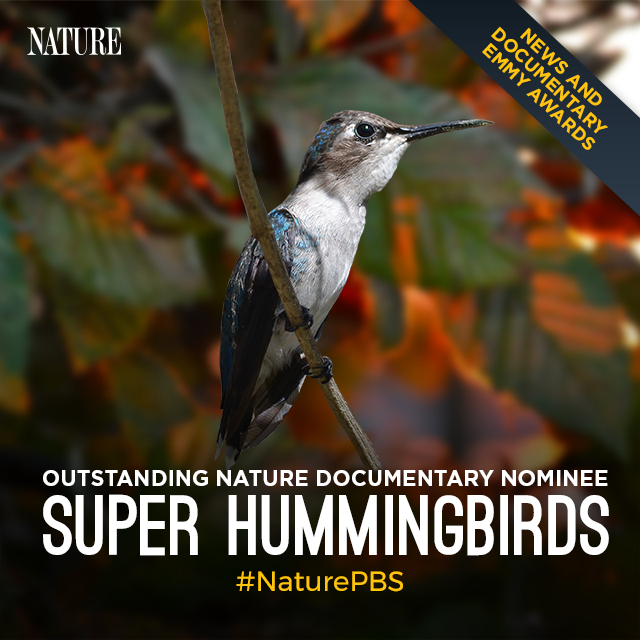 "It's time to move on to the News and Documentary Emmys, which will be awarded October 5th.  Stay tuned!"  So I finished 'Saturday Night Live' wins big on political satire with nine Emmy Awards.  I'm starting this series by following up on a passage in More nature and science at the Primetime Emmy Awards, which mentioned noted that "Wild New Zealand" was nominated for awards in both the Primetime Emmy Awards and the News and Documentary Emmys, the only show I've found with that distinction.

In the News and Documentary Emmys, the show is nominated for Outstanding Cinematography: Documentary along with four other nature shows, "David Attenborough's Light on Earth," "Desert Warriors: Lions of the Namib," "Forces of Nature," and "Nature: Super Hummingbirds."  I watched the last one at my mom's house in Utah immediately after I watched the Nova episode " Treasures of the Earth: Power."  It deserves its nomination.  As for "Wild New Zealand," its nominations prove it was well-narrated and well-photographed.

"Planet Earth II" won't be the only nature documentary recognized for its spectacular cinematography.

Since I've already featured "Wild New Zealand" in an earlier entry and I've praised "Nature: Super Hummingbirds," I'll write about the latter one first (and the first one last).  Here is the preview from PBS.

Hummingbirds are amazing creatures to behold. They are the tiniest of birds, yet possess natural born super powers that enable them to fly backwards, upside-down, and float in mid-air. Their wings beat faster than the eye can see and the speed at which they travel makes people wonder if it was indeed a hummingbird they actually saw. They also are only found in the Americas. These attributes have both intrigued scientists and made it challenging to study the species, but with the latest high-speed cameras and other technologies, Super Hummingbirds reveals new scientific breakthroughs about these magical birds.

Why do animals produce light of their own? For centuries, we could only marvel at the mystery of bioluminescence. Now we can begin to reveal the amazing truth about these living lights. Sir David Attenborough is our guide, as we venture into a world he describes as "utterly unlike our own".

The next nominee narrated by Sir David is "David Attenborough's Conquest of the Skies," nominated for Outstanding Nature Documentary.

In Conquest of the Skies 3D, David Attenborough travels through time to unravel the astonishing, 300-million-year story of the flying animals. Who were the first flying creatures, where did they evolve, and how did they adapt into the huge variety of aeronauts that fill our skies today? Only now can he reveal the hidden mechanics behind their gravity-defying skills, using cutting-edge CGI, the very latest in high-resolution filming techniques, and pioneering scientific analysis.

The third nominated show narrated by Sir David is "Flying Monsters with David Attenborough," which is nominated for Outstanding Graphic Design and Art Direction.


This is an odd one, as it was originally a 2011 movie.  I suppose it became eligible when it was shown on TV in the U.S. last year.

Time to return to the nominees for Outstanding Cinematography: Documentary with "Forces of Nature," even though it is more of a science show than a nature show.

Learn how we experience the consequences of natural forces that keep Earth on the move.

The last nominee for Outstanding Cinematography: Documentary that I haven't mentioned yet is "Desert Warriors: Lions of the Namib" from Smithsonian Channel.  I'm sharing A Vicious Lioness Rings the Dinner Bell After a Kill so my readers can admire the cinematography.

After catching an oryx in the sprawling dunes of the Namib Desert, a lioness must stand guard by her kill as scavengers look on. Her pride is out of sight, but she must find a way to share the spoils with them.

Now to return to the nominees for Outstanding Nature Documentary with "Giraffes: Africa's Gentle Giants" from PBS.

A population of rare Rothchild’s giraffes are endangered due to poaching and oil drilling plans in the African Nation of Uganda. Dr. Julian Fennessy and the Uganda Wildlife Authority work out an ambitious plan to protect the species.

There is one nominee for Outstanding Nature Documentary left, "Sonic Sea."  That one deserves a post of its own.  Stay tuned.

When the air itself becomes saturated and the temperature is just right, rare giants start to emerge. Armed with 6 thousand teeth to shred its prey, the Powelliphanta Snail is a voracious predator with revolting table manners.

As a snail expert, I can't resist.