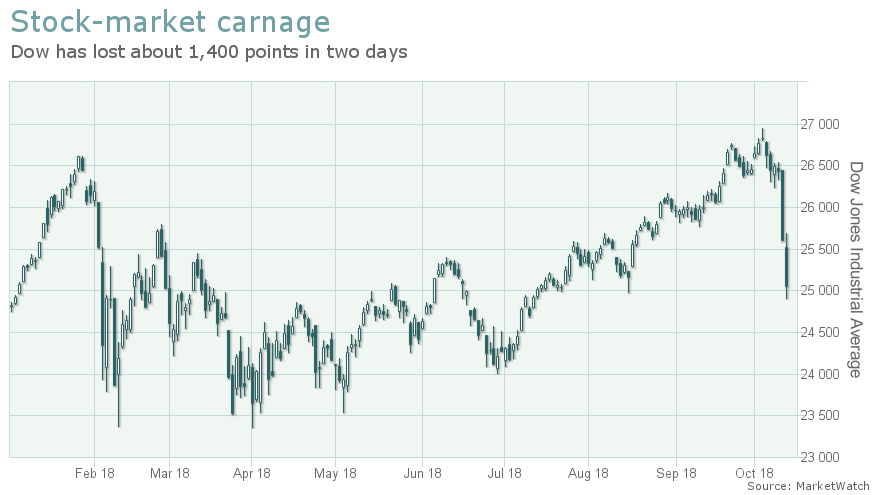 You asked on Twitter "about the latest stock market woes, is there anything worth noting?"  Time to check my predictions about stocks: "I expect the Dow Jones Industrials to get above 25,000, struggle to break 26,000, then sink down to between 20,000 and 22,500 over the next couple of years."  The Dow broke 25,000 early in January, had no trouble getting above 26,000 but then struggled to stay there, and fell about halfway from 26,000 to 22,500, so my predictions look pretty good so far.  At worst, I'm one and one-half out of three and that score will stand no matter what else happens.  As for the future, watch what happens with interest rates.  Janet Yellen's successor and the rest of the Federal Reserve Board may not raise rates as aggressively as they would have before the worst one-day point drop in the Dow.  That may allow stocks to recover to 25,000 before falling below 24,000.

The stock market sell-off isn't letting up. After flirting with gains early in the day, the Dow lost as many as 699 points on Thursday afternoon. The Dow cut about half its losses following reports that President Donald Trump and Chinese leader Xi Jinping have agreed to meet next month at the G-20 summit. The market slide tacks onto Wednesday's scary sell-off that wiped 832 points off the index.

Despite the spectacular drop, which wiped out nearly all of this year's gains, this is less than halfway to the 22,500 mark I called for.   I still have plenty of time, as I gave the market until the end of 2019 to get there.  Besides, a drop of 1776.17 points is nothing to sneeze at, even if it doesn't yet qualify as "partying like it was 1929."

Yesterday, CBS This Morning had a calmer analysis of the situation on Friday morning in What's behind the stock market sell-off?.

The markets are coming off the biggest two days of losses since February. The Dow Jones Industrial Average lost nearly 546 points Thursday, a 2.1 percent drop, on top of an 831-point plunge on Wednesday. The S&P 500 was also down 2.1 percent. CBS News business analyst Jill Schlesinger joins "CBS This Morning" to discuss what's behind the sell-off.

STOCKS RECOVERED TODAY AFTER TWO CHALLENGING DAYS ON WALL STREET. THE DOW JONES ENDED UP NEARLY 300-POINTS... STILL SUFFERING ITS BIGGEST WEEKLY LOSS IN SIX MONTHS. EARLIER I SPOKE WITH MIRO COPIC WITH SDSU'S MARKETING DEPARTMENT AND THE CO FOUNDER OF BOTTOM LINE MARKETING----ABOUT WHAT MIGHT OF SPOOKED INVESTORS.

All three reports credited the selloff to the Fed raising interest rates.  That was the first of the signals for the next recession that I listed last December.

We're getting there, as CNBC told its readers and viewers Watch out for the yield curve late last month.

The spread between short- and long-term interest rates continues to shrink — the difference between 2- and 10-year Treasury bonds was just 21 basis points on Sept. 14 — but equity investors are shrugging off the bearish signal from the bond market.

When short-term bonds pay more than long-term ones, it's usually a signal that economic growth is peaking and that a recession is on the horizon. It does not, however, mean a downturn is necessarily around the corner or that stocks are headed for a crash.

"An inverted yield curve doesn't cause a recession," said Matt Toms, chief investment officer for Voya Financial. "People get confused about the causality on that front."

It does, however, provide a strong reminder that economic cycles and bull markets don't last forever. Toms, for one, thinks the Federal Reserve Bank will pause on its path back to "normal" monetary policy to avoid an inversion of the curve. "Chairman Powell is a markets person," said Toms. "We think the Fed will stop pushing and the curve should begin to steepen by year-end."

Bob Miller, head of the U.S. multisector fixed-income team at BlackRock, also thinks the Fed will try to avoid a curve inversion. "It's possible that the yield curve inverts, but I think it's unlikely," he said. "We think the Fed will be sensitive to that possibility, and if the 10-year Treasury yield fails to rally, the Fed will signal that quarterly rate hikes are too aggressive."

I hope that Miller is right about the Fed, but I'm not optimistic.  In fact, it may already be too late.  Seeking Alpha reported that the TIPS or Treasury Inflation Protected Securities yield curve has already inverted.  It also noted that "The TIPS yield curve inverted before the last recession and forecasts growth and inflation like the nominal Treasury yield curve does."  My call for a recession beginning during the second half of next year looks even better, which is not really good news.
Posted by Pinku-Sensei at 12:00 AM