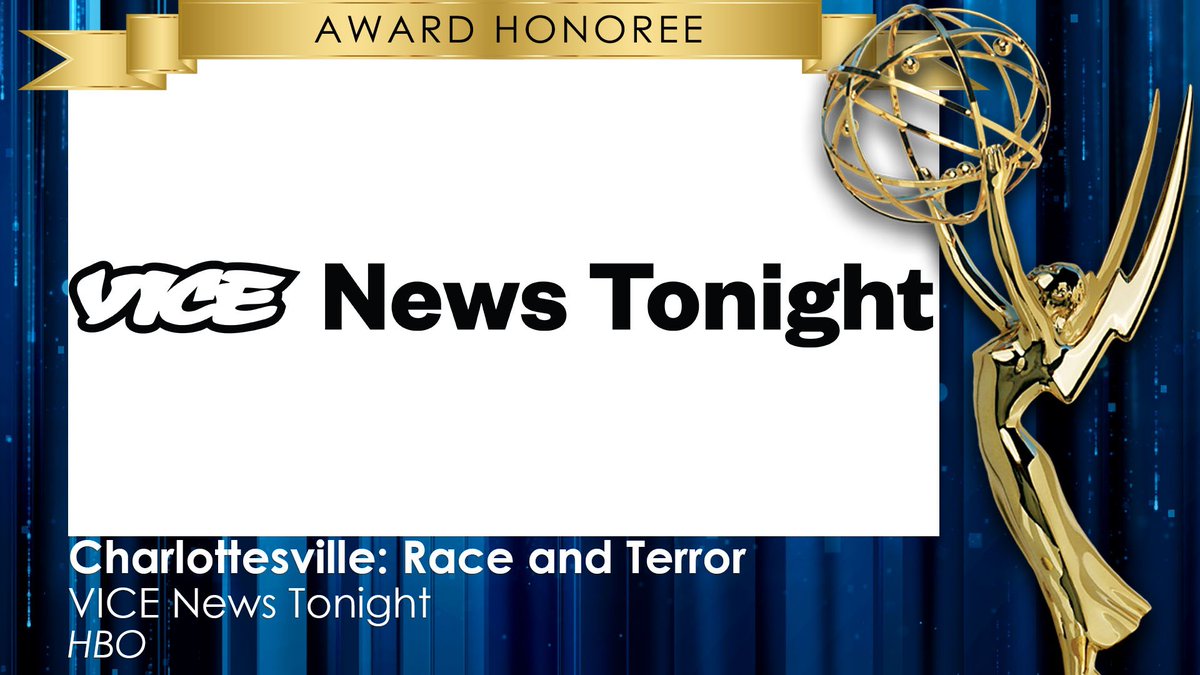 Last month, I reported that "Charlottesville: Race and Terror" was tied for most nominations at the News and Documentary Emmy Awards with "Cries from Syria" and "The Wounds of War" at four nominations, Outstanding Coverage of a Breaking News Story in a Newscast, Best Story in a Newscast, Outstanding Video Journalism: News, and Outstanding Editing: News.  It won all of them while "The Wounds of War" won two its four and "Cries from Syria" came away from the ceremony empty-handed.  This made "Charlottesville: Race and Terror" the most winning single entry at this year's News and Documentary Emmy Awards.  Wow!

Watch Martha Raddatz present the award for Outstanding Coverage of a Breaking News Story in a Newscast.


Elle Reeve's acceptance speech serves as evidence that the best disinfectant is sunlight.  The disgust at last August's Weimar moment in Charlottesville worked to drive the corn pone fascists back underground.

Raddatz herself noted that that Vice had swept its nominated categories.  She would know, as she also presented the trophy for Outstanding Video Journalism News.


Zack Caldwell foreshadowed Reeve's sentiments, again stating that exposing the alt-right was the best way to stop them and their ideas.


As for Reeve, I'm glad she maintained her composure in the face of Cavett's slightly silly introduction and praised the other women on her production team, especially the one who made her interviewee cry.


Reeve noted that the report aired only 18 hours after the last interview wrapped, so it was only fitting that Tom Clancy thanked Reeve and the rest of his crew.  Based on the speed and quality, he and the rest of the editing team deserved this award.

The Vice News Tonight crew deserves a curtain call, so here they are being interviewed after winning Breaking News Story in a Newscast "Vice News Tonight: Charlottesville -- Race and Terror".

The team from Vice News Tonight: Charlottesville -- Race and Terror, winner of the Emmy Award for Outstanding Breaking News Story in a Newscast, presented at the 39th Annual News & Documentary Emmy Awards.

By the way, the story is not over.  The day after the awards, CBS Los Angeles, which I grew up watching, reported Members Of California White Supremacist Group Arrested In Charlottesville Rally.

Four members of a militant white supremacist group from California have been arrested on charges they traveled to Virginia last year to incite a riot and attack counterprotesters.

Since there will be no second Paul Manafort trial, it looks like I'll be following this one instead.

In the meantime, stay tuned for more coverage of the News and Documentary Emmy Award winners.  I expect the next installment will be about "Life, Animated," which beat both "Chasing Coral" and "Putin's Revenge" for Best Documentary.
Posted by Pinku-Sensei at 12:00 AM