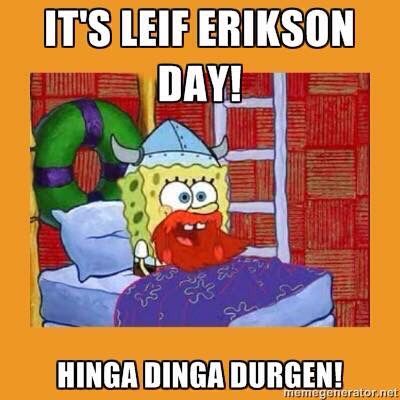 Last year, I made a promise for Leif Erikson Day.

Here is Spongebob wishing everyone in Bikini Bottom a Happy Leif Erikson Day!


On a more serious note, here is the holiday's description from National Day Calendar.

On October 9, 1825, a sloop named...Restauration, with 52 Norwegian Quakers on board, landed in New York Harbor beginning what would become the first organized immigration from Norway to the United States.  In commemoration of their journey and their exploring ancestor, Congress selected October 9 for National Leif Erickson Day.

And I was right to think so, as "Rick and Morty" won.  Congratulations!

I forgot to pick the likely upset.  I was thinking it could be "Robot Chicken," which ended up winning, but I get no credit for saying so after the fact.  Just the same, congratulations!

On the other hand, I do get credit for my next prediction.

I was right to think that Borstein, who also won for Outstanding Supporting Actress in a Comedy, had a good chance of upsetting her co-star MacFarlane, as she won.  For the first time, congratulations!*

*I'll congratulate her a second time when I write about (most) of the comedy winners tomorrow.  Stay tuned.