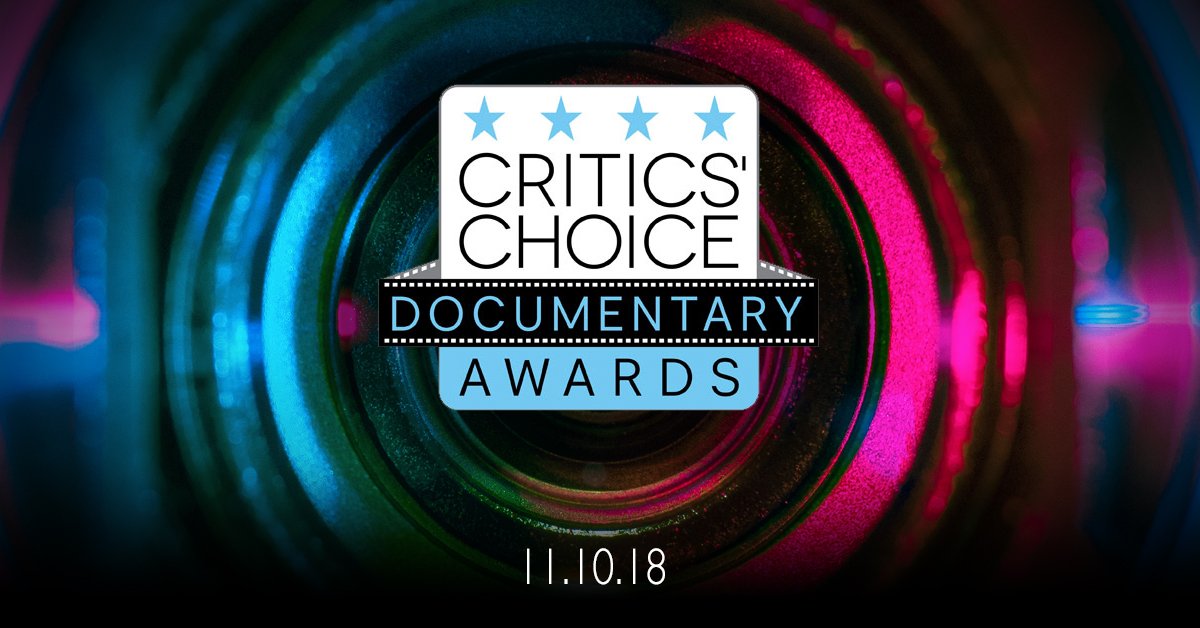 That was my promise at the end of 'Tower' wins Outstanding Historical Documentary plus five other Emmy winners covered mass shootings, which I made again in Seeker on the IPCC report and Hot Mess on coral bleaching propose solutions to urgent climate problems.  It's time to finish my busy weekend of blogging by making good on that promise for the Sunday entertainment feature.

I begin a with a video listing all of the nominees from Brian Sanchez: Critics Choice Documentary Awards 2018.

See what the Critics nominated for the Best in Documentary film. RBG? Won't You Be My Neighbor? Free Solo? Making a Murder?

For today's entry, I am focusing on the nominees for Best Political Documentary.  Here they are from the Critics' Choice Awards website.

Meanwhile, "RBG" has already earned an award for Ruth Bader Ginsburg as Most Compelling Living Subject of a Documentary in addition to the film's nominations for Best Documentary and Best Political Documentary.  Also, "The Broadcast Film Critics Association (BFCA) and the Broadcast Television Journalists Association (BTJA) have named Oscar-winning documentary filmmaker Michael Moore as the recipient of the Critics’ Choice Lifetime Achievement Award."  Congratulations to both of them in addition to all the others who will be honored for Most Compelling Living Subject of a Documentary.

Follow over the jump for my takes on some of the other categories in which these films earned nominations plus the other nominees I think will be of interest to fans of political films.

Four of the entries I've mentioned also earned nominations for Best Documentary, so I'll begin with the top category.

I'll quote from the press release about the more nominated entries in this category.

Three Identical Strangers received three nominations and an honor, including Best Documentary, Tim Wardle for Best Director, Best Editing and an honor for David Kellman and Bobby Shafran for Most Compelling Living Subjects of a Documentary.

In addition, "Hal" earned a nomination for Best First Time Director, while "Crime + Punishment" only garnered a Best Documentary nomination.

Based on the number of nominations, "Free Solo" looks like the favorite for this award.  However, Box Office Mojo identifies the three most popular based on ticket receipts.  "Won’t You Be My Neighbor?" the biography of Fred Rogers, earned $22,609,437 to be the top grossing documentary of 2018 so far.  "RBG" is currently in second among documentaries with $14,017,361, while "Three Identical Strangers" is close behind at $12,320,845.*  Because of that, I think the contest is really among these four movies plus "Minding the Gap," which is on Hulu, so it doesn't have a box office to compare, unless the winner of the next category sneaks past them.

I've already written that "Flint Town" and "The Fourth Estate" are unlikely to prevail over Emmy winner "Wild Wild Country," but I also have to add that all three are competing against another Emmy winner, "The Zen Diaries of Garry Shandling."  The only good news for either is that journalists are voting for this award, not show business professionals, so the electorate might respond better to good reporting, which the first three nominees showcase, over the portrayal of a popular dead entertainer, which the Emmy electorate rewarded.  That's the one hope I have for Emmy nominee "The Fourth Estate," an inside look at the New York Times' coverage of the first year of the Trump Administration.

Two other nominees might be of interest to fans of political documentaries, "America to Me," which examines "one of Chicago's most progressive public schools, located in suburban Oak Park," and "Dirty Money," "an American documentary television series which tells stories of corporate corruption."  Public schools are a function of government and corporate corruption is one of the issues Coffee Party USA, of which I am a director, has as one of its top five reform priorities.

I am also a scientist, so I have a personal interest in "One Strange Rock," which IMDB calls "The extraordinary story of Earth and why it is special and uniquely brimming with life among a largely unknown but harsh cosmic arena; astronauts tell the story of Earth through unique perspective."  I don't think it has a chance of winning, but that doesn't mean I won't watch it.

Continuing on with television, this category features a clash of winners between the two Emmy Awards that I cover, the Creative Arts and Primetime Emmys on one hand and the News and Documentary Emmy Awards on the other.  "Anthony Bourdain: Parts Unknown" won six posthumous Creative Arts Emmy Awards, while "Frontline" and "Independent Lens" won two awards each at the News and Documentary Emmys including one for "Tower."  I suspect the sympathy vote for Bourdain is likely to continue, so I consider his show to be the favorite.  The upset might go to "American Masters," last year's winner.

Based on the number of nominations and type of nominations, I think this will be among Jimmy Chin and Elizabeth Chai Vasarhelyi for "Free Solo," Bing Liu for "Minding the Gap," and Chapman Way and Maclain Way for "Wild Wild Country" with Chin and Vasarhelyi favored.  The Ways might have an issue for directing a television series while Bing is likely to be the favorite for the next award.

Bing is the only one of this field also nominated for Best Director, so I think he's the clear favorite.  With that out of the way, I am calling my readers' attention to two other nominees, "Science Fair" and "The Sentence."  I like the first because I teach science, while the second is a more serious film that examines the effects of mandatory minimum sentencing.  Both public education and prisons are functions of government and the laws that govern both are political issues.

I see one final category that includes a new nominee that examines politics, government, or science, so I will conclude with it.

The nominee is "Pandas," which qualifies under science for being a nature documentary.  This is its only nomination, so I don't think it has much of a chance.  Instead, I think the favorite is "Free Solo."

The awards will be given out on November 10th, so expect a post about the winners on the 11th as one of two Sunday entertainment features.  The other will likely be about the 2018 People's Choice Awards finalists.  In the meantime, stay tuned for an entry featuring Company Man's latest video about what happened to Sears, a companion of sorts to his video on KMart, as the latest on the Sears Holdings bankruptcy.  More tales of the Retail Apocalypse!

*Despite the press release stating that "'Fahrenheit 11/9' is one of the year’s top grossing documentaries," it sits far behind the top three in fourth with $6,237,938.  Maybe compared to "Whitney" (nominated for Best Music Documentary) at fifth with $3,026,351, "Free Solo" with $2,924,644 in sixth, and "Pandas" (nominated for Best Cinematography) in seventh with $2,892,597, it could be considered top grossing, but not compared to the three movies ahead of it.