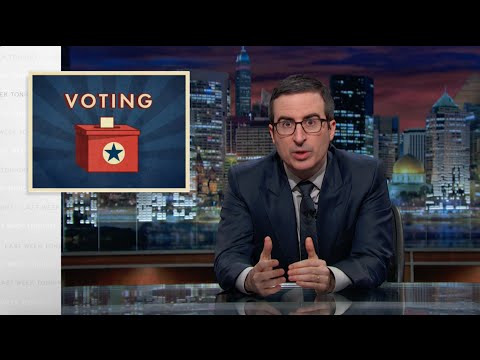 
On October 23rd get ready to go live before a studio audience on National TV Talk Show Host Day!  Created to pay tribute to TV talk show hosts and appreciate their unique form of humor, entertaining stories, spontaneous wit and timely political jokes.
...
Each day we watch our favorite talk shows, and we laugh, cry, listen and learn. It is these great hosts that make the shows ones that we want to watch.

To celebrate today, I'm showcasing my favorite talk show for political jokes, "Last Week Tonight With John Oliver," which won four Emmy Awards.  Since it's election season, the episode I'm embedding examines an issue on the ballot in Florida next month, Felony Disenfranchisement.

Many people with felony convictions are unfairly prohibited from voting, and the worst state for this — surprise — is Florida.

A survey by the University of North Florida shows 71 percent support for Amendment 4, which would allow Floridians with felony convictions to have their rights restored upon completion of their sentence or probation.

Only 21 percent of the sample of 616 likely voters said they would vote no. The margin of error is about 4 percentage points.

An amendment requires 60 percent of the vote to be ratified.

Here's to the restoration of voting rights to "about 1.6 million Floridians, largely African Americans, [who] have been permanently barred from voting without clemency."
Posted by Pinku-Sensei at 12:00 AM