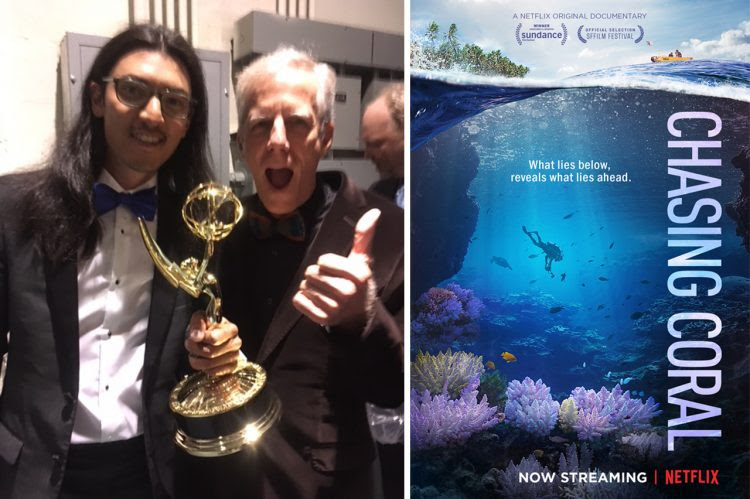 I concluded PBS NewsHour and Al Gore explain the latest IPCC climate report with the topic of today's bonus entry.

Speaking of award-winning environmental films that examine climate change, I need to follow up on "Chasing Coral" and the outcome of its nomination for Outstanding Nature Documentary.  Since it's Sunday, it's time for an entertainment feature, so I'll do that later today.  Stay tuned.


Congratulations to Jeff Orlowski and the scientists whose work he recorded.

Speaking of which, two of the researchers' institutions issued press releases about the Emmy win.  Follow over the jump for both of them.

First, the College of Charleston issued CofC Biology Professor Wins Emmy Award, which is the source of the image I used to illustrate this entry.

College of Charleston biology professor Phil Dustan has won an Emmy Award for his part in the Netflix film Chasing Coral. The film won the award for Outstanding Nature Documentary during the  39th Annual News and Documentary Emmy Awards Ceremony on Monday, Oct. 1, 2018.

The film follows a team of marine biologists who travelled to different parts of the globe taking photographic evidence of corals dying from rising temperatures.

Dustan is featured in the award-winning documentary, showing the filmmakers the destruction of the Carysfort Reef off the coast of Florida.

The College of Charleston professor has studied the Carysfort Reef since the 1970s, and has frequently thought over the years about how to advertise the grave destruction of global warming on the ocean.

“This film gave a voice to coral reefs that we haven’t had since Jacques Cousteau,” says Dustan.

In May, Chasing Coral won a Peabody Award for “bringing climate change and its deadly consequences into sharp and immediate focus.” Named for American businessman and philanthropist George Peabody, the Peabody Awards honor excellence in storytelling in television, radio and online media.

Dustan in a marine ecologist specializing in the ecology, vitality, and remote sensing of corals and coral reef communities. He has spent the past several decades researching coral reefs in the Florida Keys, Bahamas and through[ou]t the Caribbean Sea. In recent years he has developed new remote sensing techniques for coral reef change analysis using Landsat imagery. He has also collaborated on developing molecular stress markers for assessing coral health.

In Chasing Coral, Dustan positions viewers in the driver’s seat of climate change by asking, “Do we need trees? Do we need forests? Do we need reefs? Or do we just sort of want to live in the ashes of all of it?”

Good questions, Dr. Dunstan.  I hope the documentary's audience comes up with the right answers.

When Chasing Coral was named Outstanding Nature Documentary at the 39th Annual News and Documentary Emmy® Awards on Oct. 1, University of Georgia ecologist James Porter was among the film’s cast and crew on stage to accept the award.

Chasing Coral, which documents the global decline of coral reefs, features a series of underwater photographs taken by Porter that provide a “before” and “after” glimpse of the coral reefs of Discovery Bay, Jamaica.

Jeff Orlowski, the film’s director and producer, spoke on behalf of the entire team in accepting the award.

“This has been multiple years in the making, trying to reveal the invisible problem happening to coral reefs all around the world,” he said. “We’re on pace to lose coral reefs, it is a scary reality that we’re facing right now—but there’s something we can still do about it.”

The film focuses on the spread of coral bleaching, a phenomenon caused by rising ocean temperatures. When the water becomes too warm for them to tolerate, the symbiotic algae that normally inhabit coral die off, revealing the coral’s bone-white limestone skeletons underneath. Because corals can’t survive for long without their symbiotic algae, bleaching often leads to coral death.

And although coral reefs make up only one percent of the world’s oceans, they are critically important ecologically and economically, according to Porter, an emeritus professor in the UGA Odum School of Ecology. Coral reefs support more biodiversity than tropical rainforests, serving as home to roughly twenty-five percent of marine life. They also buffer shorelines from storms, helping prevent coastal erosion and provide economic benefits from tourism and fishing.

Porter said he sees his participation in this award winning documentary as a logical extension of his devotion to teaching, and hopes the documentary’s Emmy win will bring it to the attention of a wider audience.

“Teach students, teach the world,” he said. “We must address and solve environmental problems.”

Yes, we do, which is why I plan on ordering the DVD of this movie when it comes out and preparing a worksheet for it that my students can fill out while watching it.  When that happens, I'll post it here.

Stay tuned for more coverage of the winners of the 39th Annual News and Documentary Emmy® Awards, as I promised in Emmy wins by 'RuPaul's Drag Race,' 'Queer Eye,' and 'Will & Grace' for National Coming Out Day.