The revolving door between Monsanto and government for Food Day 2018

A Happy Food Day to my readers!  To celebrate the day, I am returning to what I wrote in last year's Joel Salatin from 'Food, Inc.' for Food Day: "Today, I'm continuing what I did last year in For Food Day, a guide to entries with answers to 'Food, Inc.' by discussing the worksheet for 'Food, Inc.'"

This year, I'm revisiting the questions I asked and the answers I gave in Monsanto wins gene patent case.

26. What has Monsanto done to promote use of their soybeans and stop seed saving?  List at least three examples.

...
Part of the answer to 26 is sue people who violate Monsanto's patents.

That wasn't enough of an answer.  A more complete one is that Monsanto has patented their seeds and enforced the patent by having a hotline to report violator of their patent, sending investigators out to determine responsibility, having a blacklist of growers who can't buy their seeds for not complying, and suing growers and seed cleaners.

27. List at least five government officials who were connected to Monsanto and other food producers.  What effect does the narrator think this has had on regulation of food production?
...
One of the people who traveled through the revolving door between Monsanto and the government is Supreme Court Justice Clarence Thomas, who wrote the decision allowing Monsanto to patent GMOs. 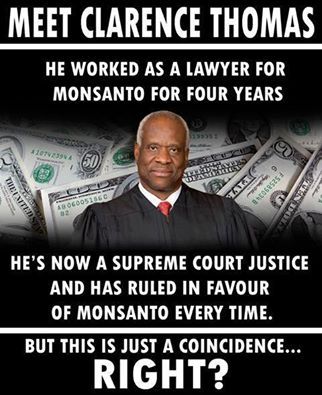 Justice Thomas is just one government official.  The image at the top that I used to start this entry lists more.  Here is another that adds to the list.

In addition to Justice Thomas, the others I recall being mentioned are Margaret Miller, Mickey Kantor, Linda Fisher, Michael Taylor, and Donald Rumsfeld.  Of all of them, the one that struck me as most emblematic of the revolving door between government and industry was Michael Taylor. 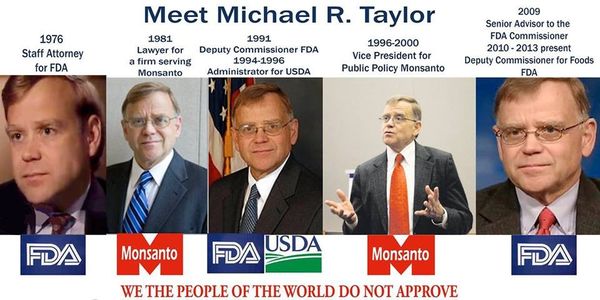 The man has made gone through the revolving door four times, going all the way around twice!

President Donald Trump says he is nominating a former executive at agribusiness giant Monsanto to head the Fish and Wildlife Service.

A biologist and lawyer, Skipwith spent more than six years at Monsanto and has worked at the Agriculture Department and U.S. Agency for International Development.

At least Skipwith isn't going to be overseeing regulation of our food.  With that, Happy Food Day!
Posted by Pinku-Sensei at 9:08 AM