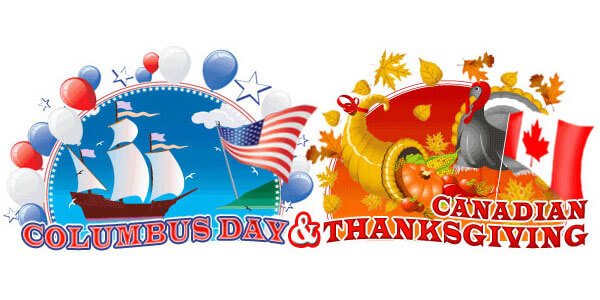 Should Columbus Day be Indigenous Peoples’ Day?
...
In past decades, Christopher Columbus has gone from unquestioned US hero to problematic figure. For centuries, the destruction and disease he ushered into the Americas have been set aside, allowing the myth of a pioneering sailor who discovered America and proved the world was round to embed itself in US culture. But as this myth has been increasingly confronted with brutal historical facts, things have started to change.

While Columbus still has a national holiday in his honor, complete with parades and celebrations, there are many people fighting to dismantle the myth that surrounds him and choosing to celebrate Indigenous Peoples’ Day instead.

Watch this video to understand how Columbus became a US icon over time and why his status is in question today.

That's about as good a video history of the day as I've found.  For a shorter version of why I don't celebrate, see this following e-card.

Now for the holiday I actually do observe, Canadian Thanksgiving.  Sabrina Cruz posted an entertaining and informative video explaining why Canadians get their own Thanksgiving last year, which is exactly the kind of video I was looking for four years ago but couldn't find.

So in this episode of Cool History, we explore origins of Canadian Thanksgiving and just how Turkey Day differs from its American counterparts (plot twist: it's not much).

Looks like the idea for the holiday appeared in Canada before it did in the U.S.  Didn't know that before.

The Vox video mentioned Native American Day, so I conclude this celebration of holidays by being a good environmentalist and recycling what I wrote last year.


Native American Day is observed annually on the second Monday in October. While it is not celebrated in all 50 states, it is recognized in both California and South Dakota while gaining popularity in the rest of the nation.

Happy historical holiday, whichever one you celebrate!
Posted by Pinku-Sensei at 8:42 AM