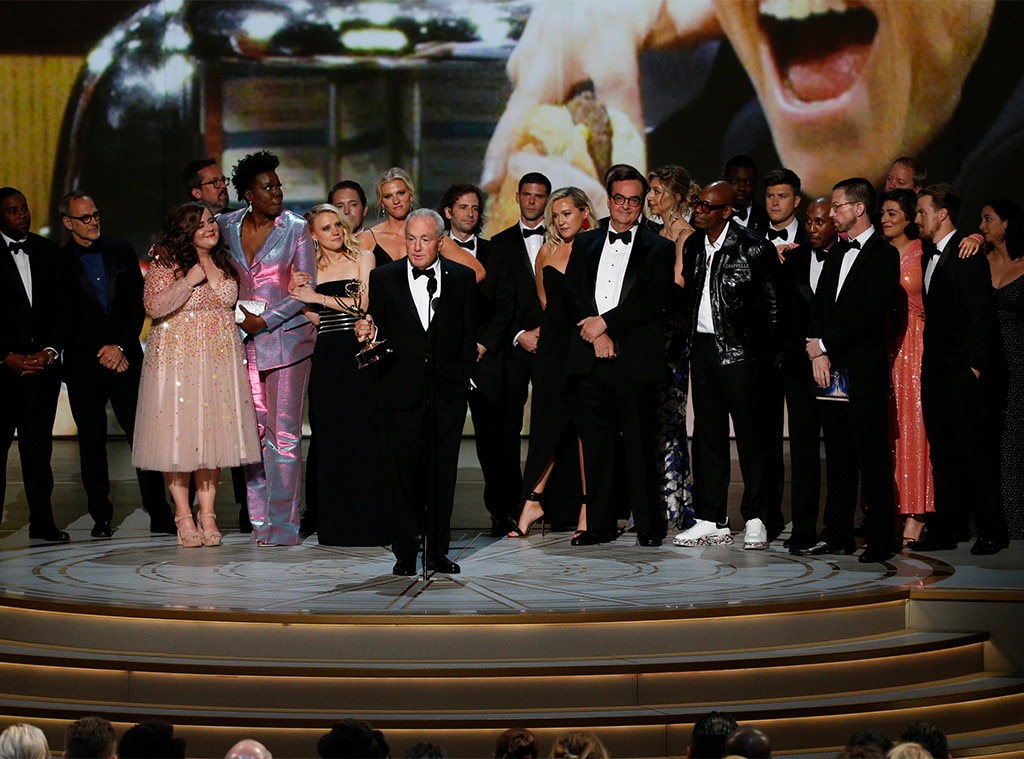 I concluded 'Game of Thrones,' 'Westworld,' and 'The Handmaid's Tale' — fantastic and futuristic government winners at the Primetime and Creative Arts Emmy Awards by telling my readers "I'll have more tomorrow about the Emmy Awards, probably the wins by 'Saturday Night Live.'"  That's what I'm doing by being a good environmentalist and recycling.


Today, I'm examining the show either tied for the second highest number of nominations behind "Game of Thrones" with 21 or, if its interactive program is counted, tied with the most Emmy-winning show on television with 22, "Saturday Night Live."

SNL ended up tied with the second most Emmy Awards behind "Game of Thrones" with nine and tied with The Marvelous Mrs. Maisel with eight. Last year, SNL was the big winner with nine Emmy Awards, but I wouldn't complain if I were them; this is still a great year for SNL.

This is the only category in which "At Home With Amy Sedaris" and "I Love You, America With Sarah Silverman" earned nominations, and I predict both will walk away empty-handed.  'Saturday Night Live' won this category last year and I'm confident it will win it again this year.

As predicted.  So was the next category, sort of, as I noted in Diversity a winner at the Creative Arts Emmy Awards.


I was closer with my pick for Outstanding Guest Actress in a Comedy, where I wrote "The speculative fiction fan in me wants this to go to Maya Rudolph, but I think it will between one of the hosts of SNL and Jane Lynch.  Yes, more 'The Marvelous Mrs. Maisel.'"  Tiffany Haddish was a guest host of SNL, so I'll count this as a success.

It turned out that Haddish did not pick up her trophy at the Creative Arts Emmy Awards, which came out in 70th Emmy Awards: Backstage LIVE! with Tiffany Haddish.

Here she is with her Emmy in 70th Emmys Thank You Cam: Tiffany Haddish From Saturday Night Live.

Tiffany Haddish talks with the Emmys Thank You Cam after winning for Outstanding Guest Actress in a Comedy Series.

Congratulations to Haddish, who I think is cute, funny, and deserving of her stardom.  May she have a long and successful career in entertainment and bring much joy to her fans.

Follow over the jump for the rest of SNL's Emmy wins.


The proportion of variety talk to variety sketch series continues to decline in the next category, Outstanding Directing for a Variety Series.

For once, "Last Week Tonight" is not defending a category.  Instead, it's "Saturday Night Live."


For the next category, I am being a good environmentalist and recycling from Bill Nye, Neil deGrasse Tyson, and NASA all nominees at the 70th Emmy Awards.


Bill Nye Saves The World...has earned a nomination for Outstanding Production Design for a Variety, Reality, or Reality-Competition Series.  This is almost identical to the nomination it earned last year for Outstanding Production Design for a Variety, Nonfiction, Reality, or Reality Competition Programming.  Congratulations on the near-repeat!  On the other hand, Nye's series is competing against "Dancing With The Stars," "Last Week Tonight With John Oliver" (the episode on the now-dead Sinclair-Tribune merger and long-dead Warren G. Harding I already wrote about), "Saturday Night Live," and "The Voice."  "Saturday Night Live" won this Emmy Award last year and I think it's favored again this year.  As I wrote last year, "Bill Nye and Netflix should just be happy to get the nomination."


Now, the last category in which "Last Week Tonight" is contending, Outstanding Technical Direction, Camerawork, Video Control for a Series.

Hey, look, a scripted comedy among all the variety and reality-competition shows!  Everybody sing "One of these things is not like the others!"  Seriously, "The Big Bang Theory" has won this award before, but the returning victor is "Saturday Night Live," which I expect will repeat with the possibility of being upset by "Dancing with the Stars," which won the award year before last.

No upset, as SNL won this again.  On the other hand, the next category was an upset.


Many of the usual suspects appear as nominees for Outstanding Lighting Design / Lighting Direction for a Variety Series.

This award has been bouncing back and forth between "Dancing with the Stars" and "The Voice" for years and I think this year will be no different, so it will be one of the two.

The award went to SNL instead — surprise!  However, it was a good surprise for SNL.  The show lost three of the four acting categories that it won last year yet was down only one award, so two categories had to make up the difference.  This was one of them.


More of the usual suspects appear as nominees for Outstanding Make-up for a Multi-Camera Series or Special (Non-Prosthetic).

SNL won last year so I think it will win this year with "Dancing with the Stars" having the best chance at upset.


It's a real grab bag for Outstanding Original Music and Lyrics.


Big Mouth (Episode: "Am I Gay?") (Song: "Totally Gay") (Netflix)
A Christmas Story Live! (Song: "In The Market For A Miracle") (FOX)
The Good Fight (Episode: "Day 450") (Song: "High Crimes And Misdemeanors") (CBS)
If You're Not in the Obit, Eat Breakfast (Song: "Just Getting Started") (HBO)
Saturday Night Live (Episode: "Host : Chance the Rapper") (Song: "Come Back Barack") (NBC)
Steve Martin & Martin Short: An Evening You Will Forget For The Rest Of Your Life (Song: "The Buddy Song") (Netflix)

Oh!  Music!  I have no idea who will win, but I'll embed the two most political songs at the end for an encore.

This was the other category in which SNL picked up a statuette in a category it didn't win last year, allowing the series to make up for two of the acting trophies it didn't earn this year.  As I wrote in the recycled section, I'm embedding the winning song for a encore.  Here it is, Come Back, Barack - SNL.

He's no longer President, but he is criticizing Trump and endorsing candidates, so he's as back as he's going to be.

I'm taking a break from the Emmy Awards tomorrow, as it will be Canadian Thanksgiving and Native American Day.  I'll return to the Emmy Awards on Tuesday.  Stay tuned.
Posted by Pinku-Sensei at 12:00 AM