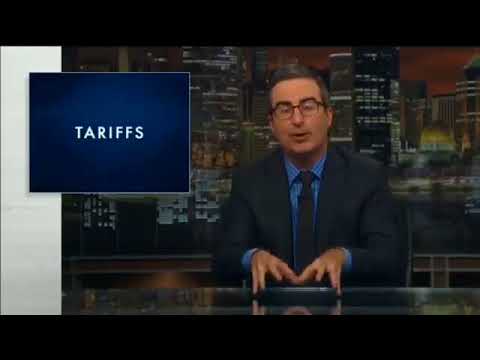 I have a habit of following up a serious post with a humorous if not downright silly one, as I did for the polar vortex, Howard Schultz exploring a run for president, the Green New Deal , and most recently the Media Bias Chart placement.  Today, I'm doing the same for yesterday's MSNBC's 'Morning Joe' and CNBC's 'Fast Money' expound on the U.S.-China trade war and its fallout with Trade: Last Week Tonight with John Oliver (HBO).

Donald Trump is waging a trade war that hurts a lot of American workers. Maybe he would understand that if our heavy-handed documentaries about the global trading system were more informative.

Last Week Tonight uploaded this video eight months ago, but it's still current.  Our Cartoon President is like a stuck clock on the issue of trade.  Unfortunately, I don't think this is one of the two times a day when he's correct.
Posted by Pinku-Sensei at 12:01 AM