Tariffs on Chinese goods will reduce GDP and cause inflation, say experts on CNBC 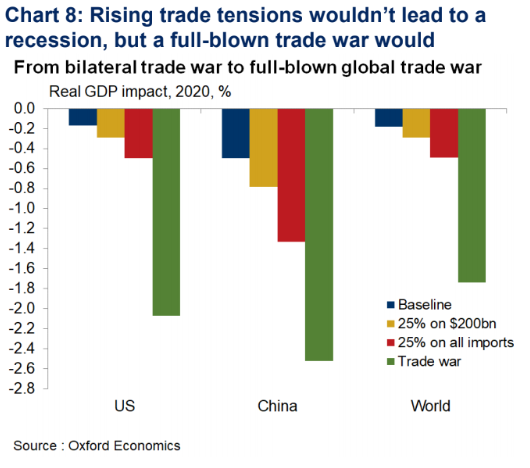 I concluded yesterday's Tariffs from the U.S.-China trade war are likely to accelerate the Retail Apocalypse by writing "it's not good for the U.S. consumer or the economy.  I'll get to that last part tomorrow.  Stay tuned."  It's tomorrow, so it's time to follow through with two videos from CNBC.

I begin with Here's what experts say about how the trade tariffs might impact the US economy.

CNBC's Steve Liesman reports on the newly released forecasts and studies that have gauged the impact of new tariffs on the U.S. economy.

First, the predictions are that the tariffs will reduce U.S. GDP from 0.25% to 0.50% while increasing inflation by 0.25% (that's what 25 to 50 basis points translate to in everyday figures).  When I wrote "trade, which I haven't written enough about, is likely to be straw that breaks the camel's back of the economic expansion and that a recession is inevitable." first in I wrote about the yield curve inverting and sending another recession signal and again in MSNBC's 'Morning Joe' and CNBC's 'Fast Money' expound on the U.S.-China trade war and its fallout, that's the kind of effect I was expecting.  Second, 'will the effects of tariffs be inflationary or deflationary?  Yes.'  I had to admit, Steve Liesman's answer was funny, if depressingly true.

Now, watch as the "eminent economist" Liesman mentioned answers questions in Here's how the trade tariffs might be impacting US GDP.  He's from Oxford Economics, which produced the graph I used to illustrate this entry.

Liesman makes two good points about the tariffs.  First, they're the largest federal tax increase since 1993, yet very few people are objecting to them on those grounds.  I guess one can raise taxes if they're intended to hurt foreigners and not framed as increasing revenue.  If it's the latter, especially if it's a tax on income, then people start to wonder what the money will be spent on.  I haven't heard a peep about that unless it's going to the border wall.  That was about tariffs on goods from Mexico, not China.  Second, all the studies on both the inflationary and deflationary effects of the tariffs are from investment firms; there are no studies from the federal government.  Then again, it's Trump; he doesn't need data to support his ideas, just his gut.

Liesman's second point leads to ask, isn't raising taxes supposed to be the job of Congress, specifically the House of Representatives?  This is what happens when Congress cedes power to the executive branch.  Now I wonder if Congress can ever take that delegated power back.

Now for an aside about CNBC's editorial perspective related to the "perma-bull" rant I posted yesterday.  Joe Kernan's comments about taxes and government spending capital inefficiently remind me of the explicitly pro-capitalist message of the channel.  I shouldn't complain about it on an investment media outlet; it's like complaining about water being wet.  It is, however, one of the reasons why my wife doesn't like CNBC.  She's in favor of a well-regulated capitalism, while Kernan and others on the channel seem to be anti-regulation.  As for Kernan's doubts about government spending capital efficiently, I refer my readers to the following paragraphs from Allow me this rant on an anti-tax meme, which I reposted the next year.


One of the favorite anti-tax memes that conservatives use is that "the government thinks it knows better how to spend money than individuals/the people do." I think that meme has it exactly backwards. First, the government in a democratically elected government is the people. Second, what government is doing when it spends is paying salaries of people and contracts to businesses, who then pay it to people. Those people now have more money to spend than they did before. As a result, government spending gives most people more power to make decisions over how they spend their money that they got from the government.

There is one exception to the above. Progressive taxation in support of government spending shows that the government thinks it knows better how to invest money than the wealthiest Americans for the greater good. The justification for keeping the tax rates low on the wealthiest Americans is that they will use that money to create jobs. They generally don't. Instead of hiring people for their own businesses, they use that money to blow speculative bubbles, whether in stocks, bonds, commodities, or real estate. Yes, those bubbles may create jobs while they're inflating, but they destroy jobs when they pop.

I still think this way, which is why I disagree with Kernan's comments.

I end with a programming note.  I am postponing the final installment of the top posts of last year about holidays and the back catalog I promised in Shopko liquidating, a tale of the Retail Apocalypse until Friday.  I'll have more time for to write it then.  As for tomorrow's entry, stay tuned to find out.
Posted by Pinku-Sensei at 10:10 AM