GNC to close 900 stores, a tale of the Retail Apocalypse 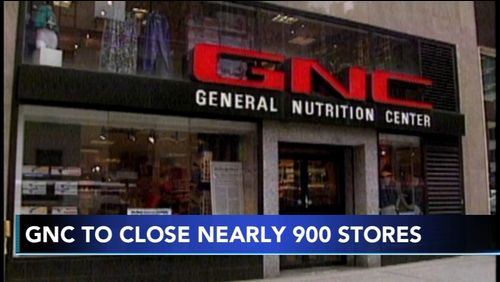 I began the month warning my readers that Bed Bath & Beyond is facing extinction.  That got people's attention, but CNBC's characterization was a bit extreme, as the chain only failed to make a profit for the first time since 1992 and is planning on closing only 40 stores.  At the same time, another chain announced it was closing far more stores.  WPXI-TV News Pittsburgh reported last month GNC to close up to 900 stores, up to half of mall locations.

The Pittsburgh headquartered vitamin and supplement store GNC has announced it will close up to 900 stores in mall locations.

I think the video description needs some clarification, which I'm getting from USA Today.

“I think it could be likely that we'll reduce our mall count by a nearly half,” said Tricia Tolivar, GNC chief financial officer. “So we've got a little over 800 malls today and over the long-term, we could bring that closer to 400 to 500.”

It's not only half of the mall locations closing, but also half of the announced closings are in malls.  WPXI's description could have meant two different things, but it actually meant both.

In addition, GNC has already lost locations from an earlier wave of closings.

In the first six months of 2019, company records show 192 company-owned and franchise locations have already closed.

It turns out this wave of closings has been in the works for a while.

GNC officials had announced in November 2018 that they would close up to 900 stores over the next three years in the U.S. and Canada as leases expire. Now, looking at the current foot-traffic trends in malls,  "it's likely that we will end up closer to the top end of our original optimization estimate," GNC Chairman and CEO Ken Martindale said.

So it seems that the loss of foot traffic in dead malls, which is hurting Ruby Tuesday and other restaurant chains in malls, is hitting GNC, also a staple of dead malls.  It was only a matter of time.

It strikes me that GNC issued this latest announcement one day before I posted 12,000 stores are likely to close this year, including at least 313 Fred's, a tale of the Retail Apocalypse.  The USA Today article has something to say about that, too.

Overall across the retail sector, more than 7,400 store closings are already in the works or completed so far in 2019, which is 27% more than all of 2018, according to Coresight Research's latest store closings report.