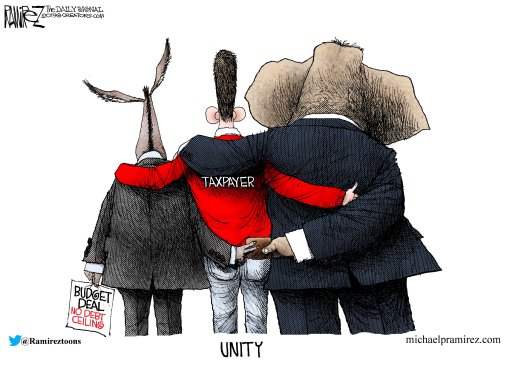 I made a prediction in a comment on What Looms Behind at Kunstler's blog.*


While I agree with our host that the inevitable decline in tight oil production will usher in a repeat of 2007-2014, I suspect the attention of politicians and the media will be focused on a possible calamity that could happen much sooner, the U.S. bumping its head on the debt ceiling, which could happen in less than two months.  Nothing like a deadline or an execution to focus one's mind!

Focusing on a deadline paid off, as Congress took action in less than one month to suspend the debt ceiling for two years.  Of course, this will cause other problems, as Lisa Desjardins reported on PBS NewsHour last night in The long-term debt implications of Senate's new 2-year budget.

The Senate passed a new budget bill Thursday, delivering a rare bipartisan legislative agreement. But critics say the spending it allocates and its temporary suspension of the debt ceiling represent runaway spending and fiscal irresponsibility. Lisa Desjardins joins Judy Woodruff to discuss the huge numbers at play, who opposed the new budget and the different types of spending it reflects.

I foresaw a lot of this coming when I wrote The tax bill and the U.S. economy in 2018 and beyond two years ago, when I wrote "Both the deficit and national debt will be larger."  That was for 8-10 years from now, but it's already beginning to happen and this deal, which is politically necessary (neither side wants to have a combined budget and debt ceiling crisis in the middle of an election), will likely speed it up.

Yahoo! Finance had a livelier but less informative discussion of the news in Senate passes two-year budget deal on debt ceiling, which I'm including here for its unintentional comedy value.

The new deal is expected to be signed by President Trump will raise federal spending and allow the government to continue borrowing money.

It's "the chickens come home to roost," not the roosters, although they're chickens, too.  On the other hand, "when the cows come home" has the implication that its a long way off.  May that be true.

*Kunstler himself responded to my comment with "The debt ceiling problem is just another facet of the energy quandary."  In the long run, it is.  In the short run, I think other causes are more important.
Posted by Pinku-Sensei at 12:53 PM