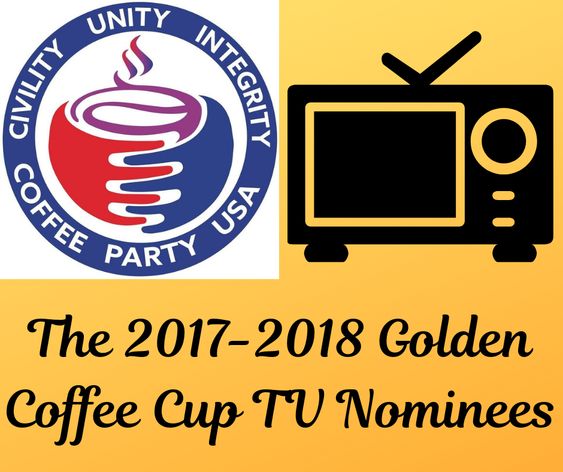 Earlier today, I told my readers to "stay tuned for the nominees for the Golden Coffee Cups for television I promised in Coffee Party USA announces the winners of the 2018 Golden Coffee Cups for movies in April.  Better late than never!"  Yes, I promised these awards in May.  It took me until August, after I had already started to blog about this year's Emmy nominees to actually follow through.  As I already wrote, better late than never to continue to recognize the best of politics in entertainment.

It's time to be a good environmentalist and reuse with slight modification my introduction from Coffee Party Entertainment Awards movie nominees for 2018.  The volunteers of Coffee Party USA and I have been voting for the past three weeks on which television shows and people to recognize for The Coffee Party Entertainment Awards AKA The Golden Coffee Cups. We came up with nominees in five categories showcasing the best in television shows about politics and government from the 2017-2018 season.  To see them, follow over the jump.

I begin with the nominees for Best Drama Series about Politics and Government.

I asked for seven nominees.  I ended up with a dozen because of an eight-way tie for fifth.  The volunteers and directors have a lot of different favorite TV shows!

Among the nominees, The Americans and The Crown were the big Emmy winners last year with nominations for Homeland, Mindhunter, Ozark, and The Good Fight.

Next, the nominees for Best Comedy Series about Politics and Government.

Here I asked for seven nominees and I got seven nominees.  There was a lot less diversity of opinion about the good comedies about politics and government than about the dramas!  Of the seven, Atlanta, Black-ish, and Brooklyn Nine-Nine were nominated for Emmy Awards last year, while Veep earned 17 nominations and won five Emmy Awards two years ago.  This is because, while the Golden Coffee Cups recognize shows from the same seasons as the Emmy Awards, they don't have a hanging episodes rule.  If even one episode of a season airs first during the eligibility period, the show is eligible.  As for Orange is the New Black, this is the first season that it did not earn an Emmy nomination, although it did earn a nomination at the 2018 People's Choice Awards.

Continuing on, here are the nominees for Best Miniseries or Movie for Television about Politics and Government.

Since I am a speculative fiction fan, I asked for nominees for Best Comedy, Drama, Miniseries, or Movie for Television about Fantastic and Futuristic Politics and Government and, boy, did I get them!

Eleven nominees for politics in speculative fiction is almost as many as the dozen for drama series.  Here, there was an eight-way tie for fourth!  Of the nominees, Black Mirror, Game of Thrones, Star Trek: Discovery, Star Wars Rebels, Stranger Things, and The Handmaid's Tale earned Emmy nominations for this season.  Black Mirror "USS Callister" won Outstanding Television Movie plus three other Emmy Awards.  The HandMaid's Tale won Creative Arts Emmy Awards  The Expanse earned a nomination at the People's Choice Awards.

Now, the nominees for the one acting category, Best Television President.

Once again, seven nominees, exactly as I asked for.  Of the field, Julia Louis-Dreyfus is a multiple Emmy Award winner, while Tony Goldwin earned a nomination at the People's Choice Awards.

The most nominated shows are Veep and Homeland with three nominations each, followed by Black Mirror, Designated Survivor, and Scandal with two apiece.  All the rest of the shows have just one nomination.

I plan on giving the directors and volunteers two weeks to vote for the winners and plan on announcing the results the last week of August.  Stay tuned.
Posted by Pinku-Sensei at 7:50 PM