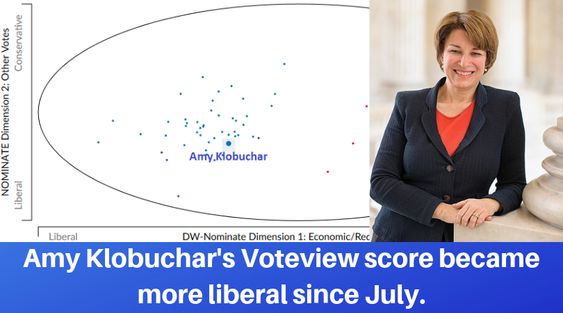 I told my readers to "stay tuned for an update to Senators and Representatives running for the Democratic nomination are drifting to the left as they campaign as the final post of the month."  I decided to go ahead even after I finding little change with no clear trends.  I suppose that's what happens when the members of Congress are campaigning instead of voting, both because they are choosing the former over the latter and because Congress is in recess during August.  That's a marked contrast to the story told by their Vote Match scores at On The Issues, which can be revised based on their statements on the campaign trail and do not depend on their votes and so told a tale of the bulk of them moving left.

That's it for August.  Stay tuned for an entry about the Emmy nominees for a Sunday entertainment feature to begin September.
Posted by Pinku-Sensei at 8:00 PM