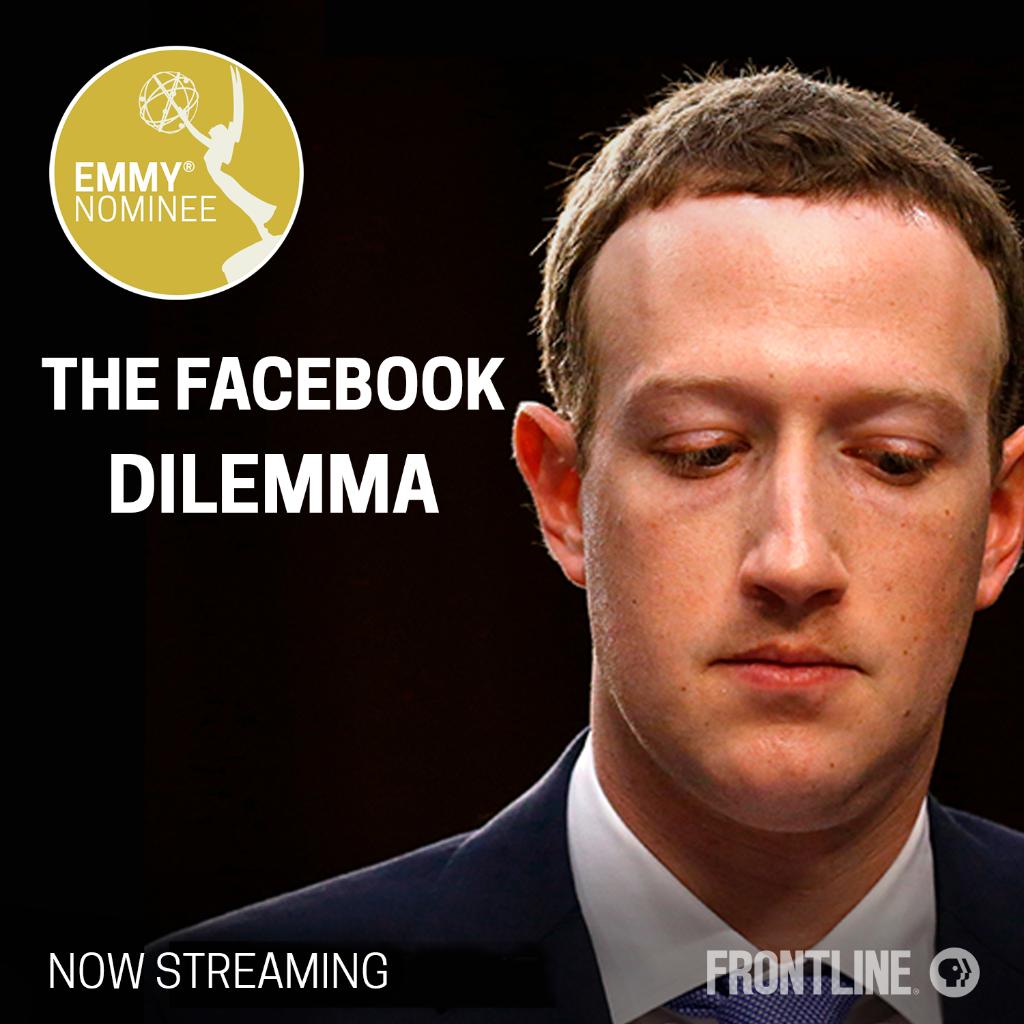 I made a prediction about "The Facebook Dilemma" on "Frontline" in 'Frontline' updates 'Facebook knows your political affiliation and much more,' the top post of the eighth year of Crazy Eddie's Motie News.

I have the same reaction to this documentary that I had to "Putin's Revenge" on "Frontline," that it will earn at least one News and Documentary Emmy Award nomination.  I was right about that prediction, as "Putin's Revenge" earned two nominations and I am confident enough that the same will happen to "The Facebook Dilemma" that I am holding off embedding Part Two until the News and Documentary Emmy nominations are announced.  As for the specific awards, I expect it will definitely earn a nomination for either Outstanding Business and Economic Documentary or Outstanding Current Affairs Documentary, and possibly for Best Documentary, Outstanding Writing, or Outstanding Research.  As I wrote before, "I am not going to hold my breath.  It's a long time until the end of July, when the nominees are announced, and the competition will be stiff."

As I mentioned in a comment on He Did What… ! ? ! at Kunstler's blog, that prediction came true:  "'The Facebook Dilemma' on 'Frontline'...has been nominated for two News and Documentary Emmy Awards," Outstanding Current Affairs Documentary and Outstanding Research, both categories I called back in March.  *Buffs nails*

Of course, a nomination is not a win, so follow over the jump for its competition in these two categories.

HBO Documentary Films HBO
It Will Be Chaos

The other nominees with two nominations are "Stolen Daughters: Kidnapped by Boko Haram," which is also nominated for Outstanding Music & Sound, and "Nowhere to Hide," whose other nomination is for Best Documentary.  On the basis of that second nomnination alone, I think "Nowhere to Hide" is favored in this category, but not for Best Documentary.  In the latter category, I think the Oscar-nominated "I Am Not Your Negro" is the favorite.  I'll examine the chances of "Stolen Daughters: Kidnapped by Boko Haram" for Outstanding Music & Sound when I examine either "Dawnland," which has two nominations, or the nature documentary nominees, two of which are also nominated for their music.

Now, the nominees for Outstanding Research.

Hope & Fury: MLK, the Movement and the Media NBC

Based on the number of nominations, I'd say "War Crime" on "60 Minutes" is the favorite.  Its three nominations tie it with "Wildland" for the most nominations at this year's ceremony.  I plan on giving both nominees entries of their own either this month or next, although "Wildland" will share the spotlight with the other nature nominees.

FRONTLINE investigates a series of warnings to Facebook as it grew into a global empire.
...
A series of mounting crises at Facebook, from the company’s failure to protect users’ data, to the proliferation of “fake news” and disinformation, have raised the question: How has Facebook’s historic success brought about real-world harm?

For another perspective on the topic, I recommend 'The Great Hack' explores how online data affects public opinion including the Cambridge Analytica scandal.

That's it for today's entertainment feature.  Stay tuned for the latest on the climate tomorrow.