Vox explains why the drinking age is 21 all over the U.S.

As I observed today on Facebook and Dreamwidth, "Today marks 30 years of living in Michigan. I have now spent more than half my life in the Great Lakes State."  I've already reflected on the move in Leaving California and I haven't accrued many new insights during the intervening five years, so I'm going to celebrate the anniversary in a more indirect way with Vox's Why the US drinking age is 21.*  It's also a road story of sorts.

Why is the US drinking age 21? And how did it happen? In this episode of Vox Almanac, Vox’s Phil Edwards explores the history of the somewhat unusual way the drinking age became 21.
...
After prohibition — the total ban on alcohol — many states established a minimum legal drinking age of 21. But that began to change after the voting age was lowered to 18. Many states followed by lowering their drinking ages, which changed the landscape for the entire country.

By the 1980s, this unusual patchwork of drinking ages started to be seen as a problem, especially by activist organizations like MADD (Mothers Against Drunk Drivers) and RID (Remove Intoxicated Drivers). They lobbied for a 21-year-old minimum legal drinking age, and President Ronald Reagan supported the cause. His mechanism for enabling a national law? Threatening to withhold Federal Highway funding to states that didn’t comply.

It was an unpredictable strategy for an official typically hesitant to use federal power over the states, and the practice was eventually challenged in the Supreme Court, where it was upheld.

Beyond the political clash, it’s a look at how roads shape policy.

I knew that Louisiana was the last state to raise its drinking age.  I learned that when I was a grad student at the University of Michigan and the undergrads I taught told me about it.  It seems attracting people 18-20, especially college students on spring break, to Mardi Gras was too big an opportunity to pass up.  Until this video, I didn't know when that distinction ended.

By the way, there is now a campaign to raise the age for buying tobacco to 21.  The American Lung Association has a map showing that it has succeeded in 18 states and the District of Columbia.  While I doubt the federal government can use the power of road funding to promote it, I have a feeling it will end up being the law in a majority of states by the end of the next decade.  If so, it might prompt the people who created this meme to change it to read "You can do these, but you cannot drink or smoke." 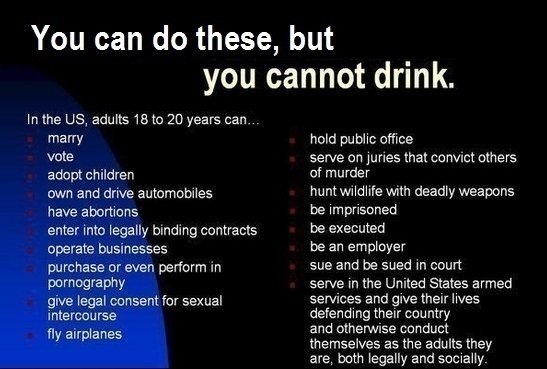 *Three days after being uploaded, it is still a trending video on YouTube, ranking #43 as I type this.
Posted by Pinku-Sensei at 9:17 AM