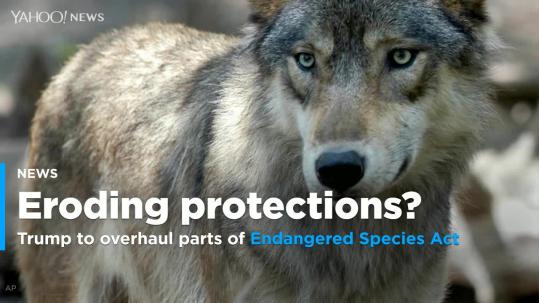 One would think that the United Nations report warning that one million species could go extinct in the next century, which I last mentioned in Verge Science and Depeche Mode on the Insect Apocalypse, would elicit more concern among people and their governments about saving endangered species.  That doesn't seem to be the case in the United States, or at least with the Trump administration, which is thinking of weakening the implementation of the Endangered Species Act (ESA).  WUSA uploaded an editorial on the proposal this morning, Changes coming to The Endangered Species Act.

According to a recent United Nations report, more than 1 million animal and plant species are at a major risk of facing extinction. The Trump administration has announced that it will be making major changes to The Endangered Species Act. Some of these changes include economic costs being considered when determining if a species should be protected and another weakens already existing protections of threatened groups.

The good news is that Trump and the rest of the executive branch can't change the law itself; it can only change how it interprets the act, including the regulations it uses to enforce it.  The bad news is that the executive branch can do a lot with regulations.  NPR has more on that last point in Trump Administration Makes Major Changes To Protections For Endangered Species.


In a move that critics say will hurt plants, animals and other species as they face mounting threats, the Trump administration is making major changes to how the Endangered Species Act is implemented. The U.S. Department of Interior on Monday announced a suite of long-anticipated revisions to the nation's premier wildlife conservation law, which is credited with bringing back the bald eagle and grizzly bears, among other species.
...
One of the changes will allow economic costs to be taken into account while determining whether a species warrants protection. Another will weaken the initial protections given to species deemed to be threatened, one step shy of being endangered.

The changes will apply only to future listing decisions.
...
Many of the changes the Trump administration is rolling out address shared administrative concerns about the act, says Jake Li, the director for biodiversity at the Environmental Policy Innovation Center. Others, he says, are problematic and weaken the bedrock law's effectiveness.

Among them is limiting which habitat — and how much of it — gets considered in determining whether a species is endangered. Land a species currently occupies would be the priority. But wildlife advocates say that could make it harder to account for threats from the warming climate, which has shrunk habitat for some species and will force others to migrate to new areas.

I'm with Jake Li; calculating economic costs, weakening initial protections, and limiting considerations of habitat are all factors that will reduce the ability of the ESA to protect threatened and endangered species, exactly the opposite of what the experts and I think is needed.  Fortunately, these changes are being challenged in court.


Numerous environmental groups and state attorneys general vow to sue the administration over the changes, alleging they are illegal because they're not grounded in scientific evidence.

I wish them both skill and luck. They and the organisms the ESA protects will need it.
Posted by Pinku-Sensei at 10:06 AM