Goodbye Ruby Tuesday, a tale of the Retail Apocalypse 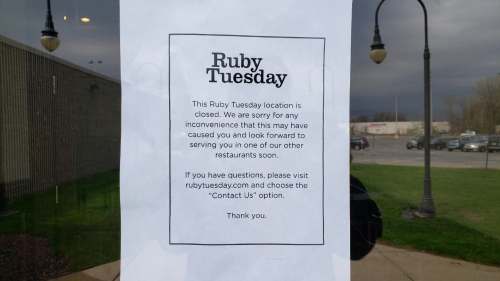 I told my readers to "stay tuned" at the end of John Oliver examines Amazon warehouses for Prime Day, a tale of the Retail Apocalypse, because "I have more on the Retail Apocalypse, as Brick Immortar uploaded a video on how the demise of malls is decimating Ruby Tuesday's and other bar-and-grill restaurants," but only after I wrote about Bastille Day.  The French national day is over and I posted Drink to a drum corps Bastille Day with the Boston Crusaders playing "Les Miserables", so it's time for me to follow through.

I'm beginning at the end of a story with Ruby Tuesday - Are Chain Restaurants The Next TO GO?: Lifeless Retail Food Edition!

Ruby Tuesday is one of many American chain restaurants that's just not faring well in recent times. Here's our look at a few that recently shuttered along with a glimpse at the bigger picture for these style of chains.

One would think that restaurants would be immune from online shopping, the usual suspect in the death of brick-and-mortar retail, and they are, at least from the direct effects.  However, as I point out to my students, everything is connected to everything else, so dead malls no longer bring in foot traffic, which means the restaurants inside them no longer have customers, so they close.  As Brick Immortar pointed out, Ruby Tuesday relied a lot on mall locations, so the Retail Apocalypse hurt them.  At least the two locations nearest me are still open, along with 489 others as of the start of the year, so the chain is not in immediate danger of going away everywhere, even if it's left most of Iowa and Nebraska, the home territory of Brick Immortar.

Also, reinventing a retail brand doesn't always work, as Brick Immortar also noted in Shopko liquidating, a tale of the Retail Apocalypse and repeated here.  I saw that happen with Bill Knapp's, which tried to reinvent itself with the slogan "That was then, this is WOW!"  That fell flat on its face and the chain, after first reversing course by proclaiming "the tradition is back," closed down for good a few years later in 2002.  All that's left of the brand are their cakes and donuts.

Other bar-and-grill format chain restaurants are closing as well.  The one that affected me most was the closure of Champps nearby.  My wife and I been going there since we moved into the area four years ago.  Then, one day I drove past and it was closed.  Perhaps I should consider myself lucky to have enjoyed it as long as I did; the other three locations in Metro Detroit closed in 2016 when the parent firm declared bankruptcy.

I wrote that I was beginning at the end of a story.  Follow over the jump for what I would like to think was my part in inspiring the video above.

A tweet by Retail Archeology makes for a convenient starting point.


I've noticed an increase in grocery store closures lately. They seem to be the next casualty of the retail apocalypse.

I responded by looking past grocery stores.


After grocery stores/supermarkets, the next casualty might be chain restaurants. @BImmortar [Brick Immortar] has noticed a lot of Ruby Tuesdays closing in his neck of the woods, for example.

That got Brick Immortar's attention.


Yeah, most Ruby Tuesday's shuttered practically overnight here in the Midwest.
This could also like speak to delivery/pickup just like groceries. And when your lunch menu is priced so low, those busy lunch hours in industrial/commerce areas don't mean jack.

That exchange happened on July 5th.

No, it doesn't look fresh anymore.

He then posted the video on July 10th.  I'd like to think I helped inspire it.

Speaking of the video, I made a promise in a comment to it.


Pinkusensei from Twitter here.  Thanks for uploading this.  I'll be sure to use this in one of my blog posts later this month.

Here I am, keeping my promise.

Speaking of promises, I'm still working on an update of On The Issues's rating of Democratic candidates that I promised in Senators and Representatives running for the Democratic nomination are drifting to the left as they campaign.  Stay tuned.
Posted by Pinku-Sensei at 9:58 AM