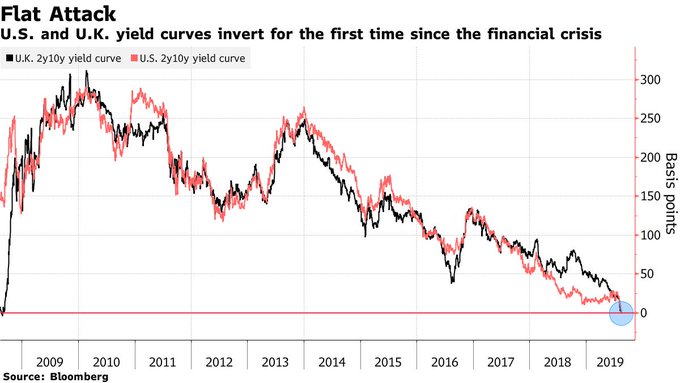 I told my readers to "stay tuned" at the end of The part of the yield curve the Federal Reserve watches just inverted, sending another recession signal back in March.

The economic storm clouds are not just visible on the horizon, but building.  All that I'm waiting for to say that the weather is advancing on us is an inversion of the 2-year and 10-year Treasuries.  When that happens, I'll report it.

CNBC's Steve Liesman breaks down why investors are still concerned about falling yields and what it may mean for the economy.

Joe Kernan expressed a lot of wishful thinking about the economy, which Steve Liesman called him out on.  I've complained about Kernan's opinions before along with CNBC's perma-bull editorial stance and this is another instance of both.

Both CNBC and Bloomberg think that the Federal Reserve will lower the Fed Funds rate and Golub thinks they should do it ASAP.

Even before the 2-year and 10-year yields inverted, CNBC uploaded The yield curve is a good indicator of a recession, rate strategist says yesterday.

Going back even farther, NPR noted in June that the 3-month and 10-year remained inverted for three months in What Just Happened Also Occurred Before The Last 7 U.S. Recessions. Reason To Worry?

But on Sunday, an inauspicious milestone was achieved: The yield curve remained inverted for three months, or an entire quarter, which has for half a century been a clear signal that the economy is heading for recession in the next nine to 18 months, according to Campbell Harvey, a Duke University finance professor who spoke to NPR on Sunday. His research in the mid-1980s first linked yield curve inversions to recessions.

"That has been associated with predicting a recession for the last seven recessions," Harvey said. "From the 1960s, this indicator has been reliable in terms of foretelling a recession, and also importantly, it has not given any false signals yet."

That was after I wrote Experts call for high risk of recession by end of 2020 because of trade policy at the beginning of June.  I'm going to be a good environmentalist and recycle what I wrote then.

I'm going to repeat two points.  One, "when I wrote 'trade, which I haven't written enough about, is likely to be straw that breaks the camel's back of the economic expansion and that a recession is inevitable,' first in I wrote about the yield curve inverting and sending another recession signal and again in MSNBC's 'Morning Joe' and CNBC's 'Fast Money' expound on the U.S.-China trade war and its fallout, that's the kind of effect I was expecting."  Two, "I've been bearish and on recession watch since December 2017 and still stand behind the prediction I made in Ten years ago, we were partying like it was 1929. Are we about to do it again?...'I'm moving my recession call to between July and December 2019.'"  If that happens, it will be closer to December than July, which is only a month away, but I will not revise my forecast until October at the earliest.  I'm even more confident that a recession is coming, even if it takes a bit longer than I expect.